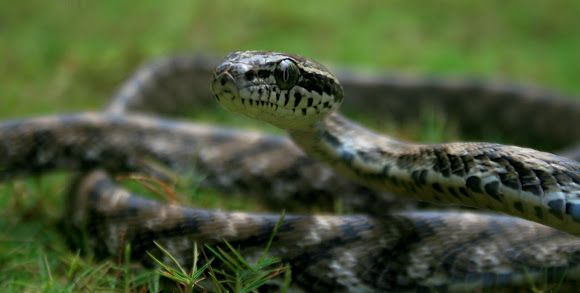 From Wikipedia: "Forsten's cat snake (Boiga forsteni) is a species of rear-fanged colubrid found in Nepal, Sri Lanka, and India (Sikkim, Maharashtra, Kerala). The specific name is in honor of Dutch naturalist Eltio Alagondas Forsten (1811–1843)." They can be anything from an Orange color, to a black color, although most commonly they're grayish with black crossbands and speckling. This is the common morph.

Rainforest along the western Ghats, occupying trees and scrubs, although they can be seen in open clearing actively hunting, too. Some spottings have been recorded from open scrubland, too.

Rather aggressive, coiling up and striking repeatedly when disturbed. They are mildly venomous, and I can vouch from personal experience that bites hurt like hell. Mild swelling that goes down by the next day. I've seen them catch and eat geckos, Agamas, small birds and mice.