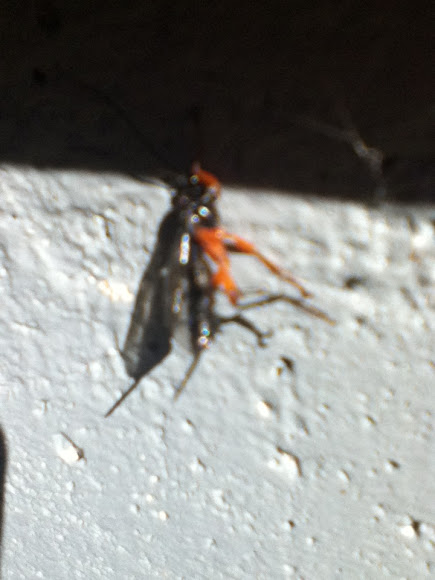 It has red legs and a black body. There are between 40,000 to 100,000 species of Ichneumon wasps found all over the world. They are slender with sectioned antennae and can be between 1/8 inch to 5 inches long. Generally considered a beneficial insect, these wasps prey on pest insect species. All Ichneumon species are in the family Ichneumonidae.

Most of this wasp species are found in forests and particularly like to inhabit dead or dying broad leaf trees. They may also be found in fields which sport lots of shrubs or that are lined with forest. Usually they live in places that are frequently damp. A few species spend most of their time around bodies of water. The only place these wasps cannot be found is where it is very dry, such as deserts, and places without tree cover, such as open plains. Most species are not found near human habitation.

As we were walking around our yard looking for bugs, we came across this wasp on the side of our house. It looked like it was trying to drill a hole in the cement on the bottom of our house. It was obviously content because it did not sting me as I took its picture numerous times.