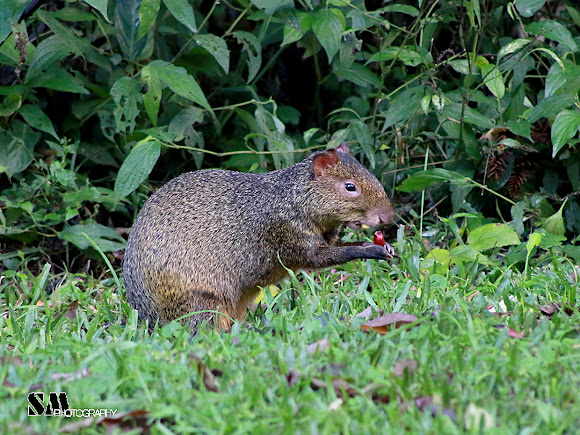 The term common agouti designates several rodent species of the genus Dasyprocta. They are native to Middle America, northern and central South America, and the southern Lesser Antilles. Some species have also been introduced elsewhere in the West Indies. They are related to guinea pigs and look quite similar, but are larger and have longer legs. The species vary considerably in colour, being brown, reddish, dull orange, greyish or blackish, but typically with lighter underparts. Their bodies are covered with coarse hair which is raised when alarmed. They weigh 2.4–6 kg (5.3–13 lb) and are 44.5–76 cm (17.5–30 in) in length, with short, hairless tails. (Wikipedia)

Agoutis are very shy animals. They live in forests and wooded areas, and are rarely seen in open spaces. The common agouti, also known as Azara's agouti, can be found in southern Brazil, Argentina and Paraguay.

I got this spotting because this agouti left the wooded area to eat some araucaria's seeds ("pinhão") that were on the ground. In Brazil all agoutis are known by the name "Cutia", without distinction of species.