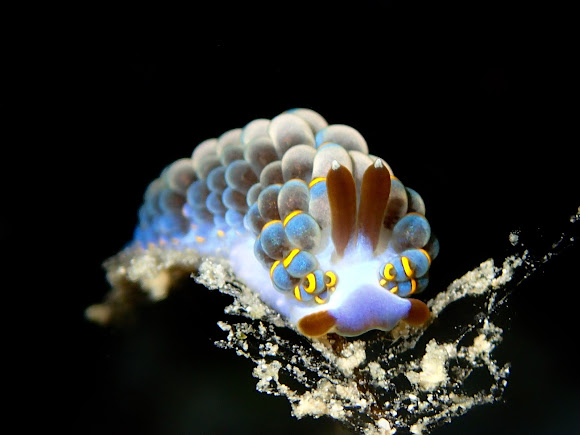 This Aeolid Nudibranch has been mis-identified many times as Cuthona yamasui, with the genus also wrongly placed, and now updated to the genus Tenellia. Tenellia was a small genus until a DNA phylogeny of the former family Tergipedidae resulted in most species of Cuthona being transferred to this genus. This picture is of a yet to be described Tenellia species. It has brown oral tentacles and rhinopores with white spot on the tip of its rhinopores. Its cerata are blue in colour with yellow/gold band and brown borders on the yellow band. This Aeolid Nudibranch feeds on Hydroids, which it is resting on, but covered with sands.

Congrats Albert! This is a quite stunning photo!

Thanks, @Daniele and to PN for selecting this picture.

Thanks too, @Antonio and @Marek :)

Congratulations Albert, your Aeolid nudibranchis the undisputed winner of our 2017 Best Wildlife Photo competition, Others category:

Missed this one - just fantastic !

Congratulations Albert. This is so beautiful!

Thanks, @remkinloch. This species has been known to scuba divers for many years, just that it was wrongly identified and now that it is known to be a different species, I am sure there are Scientists/Taxanomists working on the scientific description, but this process usually takes years to do.

Thoroughly deserving SOTD. Nature never ceases to amaze with the fantastical creatures that are out there, waiting to be discovered. Hard to believe that something so beautiful has escaped human attention!

Thanks, @Daniele for this SOTD :)

Congrats on the spotting of the day! This is brilliant.

I have now TOTALLY run out of words!!!

OH MY!!! The colors are FANTASTIC!!

Nudibranchs never cease to amaze! Congratulations Albert Kang, this yet to be described aeolid species is our Spotting of the Day!

Yes, and thanks for taking the time to further research about this Nudibranch.
Many websites/posts have made the error and sometimes, the reference of sp # is also wrong.

I got my confirmation from a friend who is also an expert in Nudibranch :D

Thanks Albert. I started reading about the genus and stumbled across this species, which I thought looked similar in many points...

Hi Daniele, Philippine-Sea-Slug forum is not the best/ultimate reference as most Nudibranch are not endemic to Philippines.

It is listed as Cuthona sp 13 in Nudibranch & Sea Slug Identification (NSSI), so here again you can see that NSSI has yet to update the genus change from Cuthona to Tenellia.

Fantastic Albert! Is it the one referred to as Tenellia sp. 04 here?
https://www.philippine-sea-slugs.com/Nud...