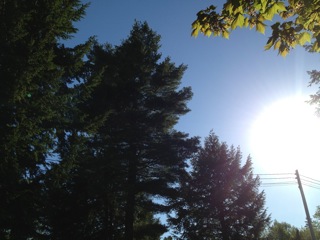 Pines are evergreen, coniferous resinous trees (or rarely shrubs) growing 3–80 m tall, with the majority of species reaching 15–45 m tall. The smallest are Siberian Dwarf Pine and Potosi Pinyon, and the tallest is a 268.35-foot (81.79-meter) tall Ponderosa Pine located in southern Oregon's Rogue River-Siskiyou National Forest.[4] Bark chips The bark of most pines is thick and scaly, but some species have thin, flaking bark. The branches are produced in regular "pseudo whorls", actually a very tight spiral but appearing like a ring of branches arising from the same point. Many pines are uninodal, producing just one such whorl of branches each year, from buds at the tip of the year's new shoot, but others are multinodal, producing two or more whorls of branches per year. The spiral growth of branches, needles, and cone scales are arranged in Fibonacci number ratios.[citation needed] The new spring shoots are sometimes called "candles"; they are covered in brown or whitish bud scales and point upward at first, then later turn green and spread outward. These "candles" offer foresters a means to evaluate fertility of the soil and vigour of the trees. Pines are long-lived, typically reaching ages of 100–1,000 years, some even more. The longest-lived is the Great Basin Bristlecone Pine, Pinus longaeva. One individual of this species, dubbed Methuselah, is one of the world's oldest living organisms at around 4,600 years old. This tree can be found in the White Mountains of California.[5] An older tree, unfortunately now cut down, was dated at 4,900 years old. It was discovered in a grove beneath Wheeler Peak and it is now known as Prometheus after the Greek immortal.

This is my favorite tree on my front lawn. Pines are trees in the genus Pinus /ˈpiːnɪs/,[1] in the family Pinaceae. They are the only genus in the subfamily Pinoideae. There are about 115 species of pine, although different authorities accept between 105 and 125 species. The seeds are commonly eaten by birds and squirrels. Some birds, notably the Spotted Nutcracker, Clark's Nutcracker and Pinyon Jay, are of importance in distributing pine seeds to new areas. Pine needles are sometimes eaten by some Lepidoptera (butterfly and moth) species (see list of Lepidoptera that feed on pines), the Symphytan species Pine sawfly, and goats. Reference: Wikipedia