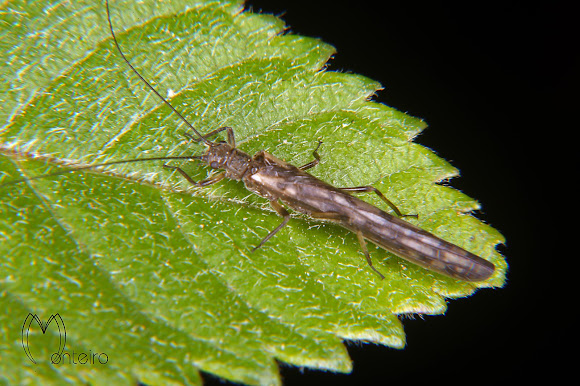 Plecoptera (Stoneflies) is an order of insects with aquatic nymphs and terrestrial winged adults. The nymphs are mainly associated with clean, well-oxygenated and lower temperature streams. In its environments, they can be found in boulder surfaces, among pebbles, tree trunks, moss and leaf packs. Adults live on riparian vegetation or over rocks, closely associated with water bodies where the nymphs (immatures) live. As in general the adults fly short distances (weak flying), the populations tend to be spatially structured. Eggs deposition occurs most often during flight when the females plunge the terminal region of the abdomen into the water and disperse the eggs mass that attach to the substrate, remaining pooled until the hatching. Subsequently, the young nymphs pass through successive stages of growth and change until they become adults. In general, the nymphs of Plecoptera are detritivores, shredders, scrapers or carnivorous. In some cases, the feeding can change during stages of development, for example, several carnivorous species have their firsts instars detritivores. As the nymphs live in fresh and cold water, where the dissolved oxygen concentration is high, most stoneflies species have high sensitivity to environmental changes. Thus, this group, together with Ephemeroptera and Trichoptera (E.P.T.), has been relevant in environmental impact assessment studies of the water quality, mainly in North American and European countries.

A small, protected wooded area close to a small river.

The text above was taken from "Systematics of Gripopterygidae Enderlein, 1909 (Insecta: Plecoptera): cladistic analyses of Gripopteryginae with notes on Brazilian species and revisionand phylogeny of Paragripopteryx Enderlein, 1909". The link for this paper is here: https://teses.usp.br/teses/disponiveis/5...