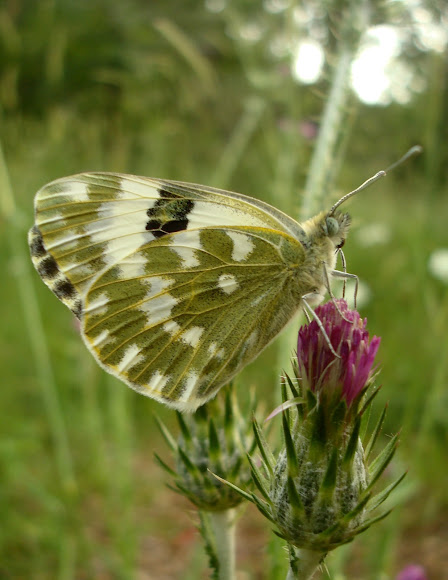 It is a small to medium-sized migrant butterfly, with a wingspan reaching about 45 mm. The upperside of the wings is white, with black stains on the top of the forewing and hindwing. The hind wing undersides have greenish-gray spots. The adults fly from March to October.

It is found from the South East of Europe (Southern France, Italy, Corsica, Sardinia) up to Central Europe and Middle East in Iran and Iraq. It is a migrant who can also be encountered in Belgium, Holland, northern Germany and Poland, in the Baltic states and in southern Sweden and Norway.

The butterfly is nearly identical to Pontia daplidice. The only was to surely ID them is DNA which is completely different. Daplidice is found is Western and Central Europe to Eastern Asia and that includes this area too but somewhere is also mentioned is rarer presence comparing to edusa that made me believe that is more likely edusa in a non remote, crowded area than a rarer daplice. Both species are migrating, although daplidice less than edusa. Bayucca even pointed out that there even could exist its offspring-crossing between 2 species (Pontia edusa/daplidice).

Btw there is also a similar word used here in out dialect that has the same meaning as Bastardgürtel, it is baštardo which is pronounced [bashtardo], I guess it came from German ;) ah it is not so long ago that this was still Öster reich ;)

Yes, Daplidice is probably rarer than Edusa, and personally I would tend to Edusa as well, but without the native specimen and DNA we cannot be 100% sure. At least there are not so many butterflies with such a tremendous discussion around, which make our lives not as hard as it is with these 2 ;-)...

Ok before I though it wasn't found in Croatia but I have found a questionnaire for marking which butterflies can be found for Istrian peninsula and it is marked so it is found here as well, however it is mentioned its slow disappearance so I would say that daplidice is a much rarer find and that questionnaire was made for some much more remote areas, but as a compromise I will mention was you wrote in notes under ;)

Unfortunately yours might also be Pontia daplidice, although the "classic" range is more the western Europe. However, classic means also that many of these two Pontia might not be correctly identified, specially if you look in older books or references. There are still conflicting results and reports about the taxonomic entity. Fact is: you cannot distinguish them by sight or 100% safe by genital dissection, only DNA. And this DNA is completely different as only DNA of different species can be. Some researchers tried to cross the two, but I didnot found some reports in public libraries. Daplidice is found is Western and Central Europe, Croatia is central Europe (Switzerland should be Middle Europe), to Eastern Asia. Both are migrating butterflies, although Daplidice less than Edusa. There is even a so called "Bastardgürtel", sorry for the German expression, but I do not know an english word for that and I do not know the exact location/range of this "hybrid belt".
Personally I would also tend to Edusa, but with the knowledge of all the troubles, I suggest that you take Pontia edusa/daplidice as scientific name. I think that is a valuable compromise. What do you think?