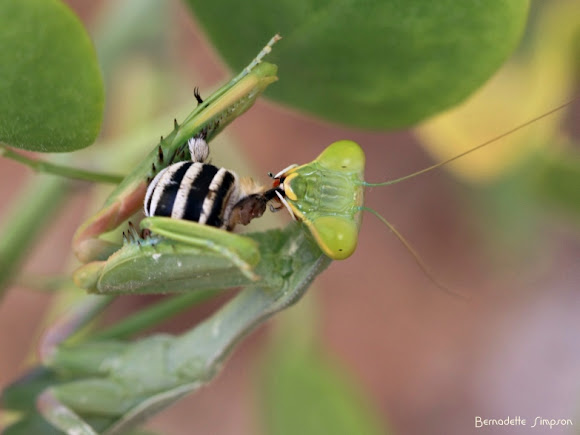 "Mantises have two grasping, spiked forelegs ("raptorial legs") in which prey items are caught and held securely...Most mantises are exclusively predatory and exceptions are predominantly so. Insects form their primary prey, but the diet of a mantis changes as it grows larger...The majority of mantises are ambush predators. Species that are predominantly ambush predators camouflage themselves and spend long periods standing perfectly still. They largely wait for their prey to stray within reach, but most mantises will chase tempting prey if it strays closely enough." ~wiki

spotted on the caper bush in my desert garden

This nymph has been in my garden for a few weeks now, mostly spending time hanging out by the caper buds and flowers as they open. I'm pretty sure he ate all of the caterpillars that hatched from these eggs: http://www.projectnoah.org/spottings/247.... Kind of thankful about that because they would have munched way too much of my caper bush.

Congratulations on a great spotting!

Thank you all! It has definitely been my "smile of the week". :-)

Thank you, Harsha, Rieko, and Sachin! I am one happy spotter. :-)

Congratulations! It is a great honor to be chosen by the National Geographic spotting of the week!

Thank you all very much! It is quite an honor. :-)

Congratulations on the SoTD, Bernadette.

Congratulations, Bernadette! What a great honor and series!

Congrats, I am so happy for you, it's well deserved! ;)