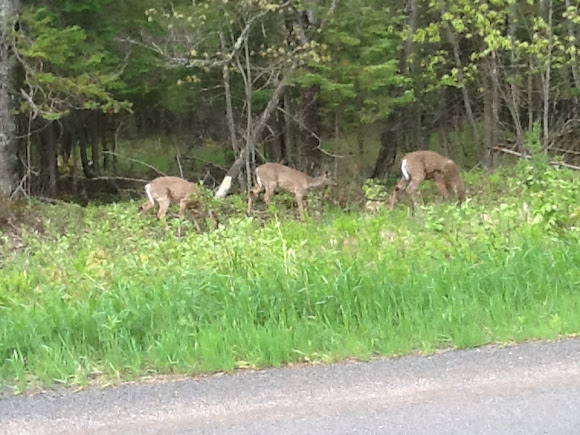 Deer, a common name for hoofed mammals of the family Cervidae, are usually characterized by bony, branching antlers, which are shed and regenerated annually. This family ranges throughout the Americas, Europe, Asia and North Africa, and contains 38 species. Most female deer give birth to one or two young each spring, six to eight months after mating. Many of the offspring, or fawns, are born with spotted coats, but the spots will disappear in a few months when the animal grown its winter coat. In some species of deer native to Europe and Asia, the adults also have spots. Because they have so many enemies, deer must be alert, relying on their keen senses of sight, smell and hearing to warn them of impending danger. Deer are now found on all continents except Antarctica. The moose is the largest member of the family and can weigh as much as 1,800 pounds. The smallest deer, the pudu, is the size of a raccoon and weighs around twenty pounds. Most deer in North America are white-tailed deer, with about 12 million living in the United States

Cervids live in a variety of habitats, ranging from the frozen tundra of northern Canada and Greenland to the equatorial rain forests of India, which has the largest number of deer species in the world. They inhabit deciduous forests, wetlands, grasslands, arid scrublands, rain forests, and are particularly well suited for boreal and alpine ecosystems. Many species are particularly fond of forest-grassland ecotones and are known to reside a variety of urban and suburban settings. Habitat Regions: temperate ; tropical ; polar ; terrestrial Terrestrial Biomes: tundra ; taiga ; desert or dune ; savanna or grassland ; chaparral ; forest ; rainforest ; scrub forest ; mountains Wetlands: marsh ; swamp ; bog Other Habitat Features: urban ; suburban ; agricultural

There were 5 deer beside a highway near Grand Lake, NB, Canada.