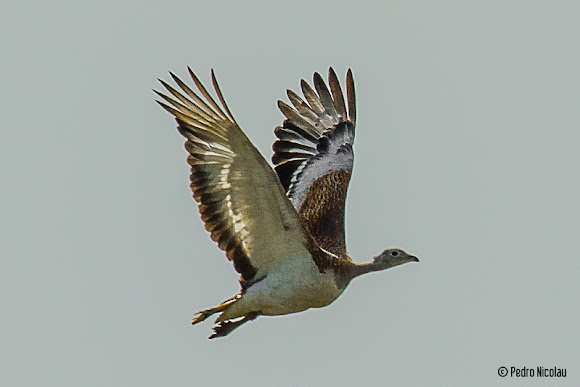 Known for being the heaviest flying animal on Earth and for their spectacular communal displays, great bustards can weigh up to 16kg (35.2 lbs) ! Its a stunning bird, with accentuated sexual dimorphism, which occupies a unique habitat that is quickly fading from our world. About 50-60% of its population lives between Portugal and Spain, and is essentially resident. However, as incredible as it sounds, these huge birds can make incredible migrations and have appeared quite far away from their normal range. It's such a shame their numbers are decreasing so badly, but while they are still in living freely on Earth's plains, let's sit back and enjoy one of nature's greatest crafts.

Pedro, Mark and Leuba, you're welcome. Leuba, the FOTD has a link to the original research. Basically, hours of observations, feces collection (!) and lots of statistics. If this is a bit too much Science Daily has a good coverage of it:
http://www.sciencedaily.com/releases/201...

Congratulations Pedro ! that is great information about these birds. Thanks to Daniele - what amazes me most is the research -how do they do it ??

Congrats Pedro! Thanks Daniele for a great fun fact. Pam I don't know how that happened. I wonder if cloaca checking could catch on :-/

Amazing photos of a magnificent bird. Hahaha Mark, you didn't miss this series, you were the 4th to comment - in Portugese no less !!

Well deserved! Fun series. Visiting the lek must have been a blast.

There is no doubt this is a most interesting bird Pedro! Congratulations! Your spotting has been chosen for Project Noah Fact of the Day: " Would you consume toxic beetles to increase your chances of passing your genes on? The great bustard, a large bird found in Europe and Asia, could be doing exactly that. The beetles in question are in the family Meloidae (“blister beetles”) and produce cantharidrin, a toxic compound with antibacterial and antihelmintic properties. Great bustards are tolerant to this toxin, and routinely ingest meloid beetles to medicate for gastrointestinal infections caused by bacteria, tapeworms and nematodes – a behavior known as zoophamacognosy. Recent research now suggests that great bustard males may use cantharidin to reduce their parasite load in order to look healthier, more resistant, and thus more attractive for females. Indeed during courtship display the female great bustard routinely inspects the male’s cloaca, checking its white plumage for signs of parasites and diarrhea. Quite an extreme form of sexual selection!
http://journals.plos.org/plosone/article...
Great Bustard (Otis tarda), spotted in Portugal by Project Noah user PedroNicolau"
https://www.facebook.com/projectnoah/pho...

Project Noah Fun Fact! The great bustard is the heaviest living flying animal! Despite weighing in at up to 40 pounds or more, great bustards can (and do) fly. The species breeds in southern and central Europe, where it is the largest species of bird, and across temperate Asia. Portugal and Spain now contain about 60% of the world's population. https://www.facebook.com/projectnoah/pho...

How did I miss this excellent series and spotting. Thanks Pedro.

Great series Pedro! Love the last image of them all in flight

Thank you so much everyone.
António, you are right, I was very fortunate to have been able to watch these creatures so closely. It's just that at that time of the year the bustards fly around really often, increasing the chances of them landing near you - which kind of happened.

Great find Pedro! Thanks for the information Antonio!