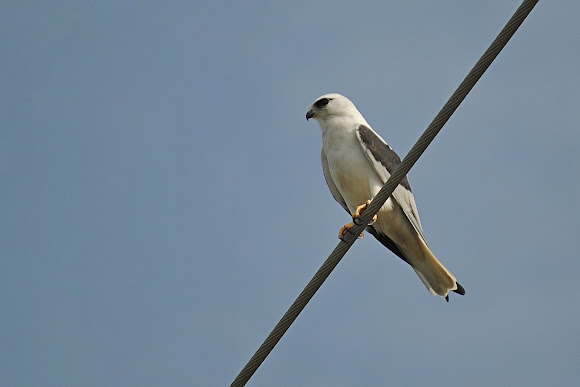 A small raptor, very similar in size to the Nankeen Kestrel, roughly 35cm in length. The back and wings are pale grey with white undersides. The wings have a distinctive dark grey 'shoulder' patch. It has large red/brown eyes with black around them. Legs are yellow.

Open grassland with nearby trees - again similar to the Nankeen Kestrel. It is probably not surprising that I cam across theses two species within a few hundred meters of each other. The Kite hunts by hovering over an area, and gradually dropping lower and lower as it zeroes in on its prey. It eats small rodents and lizards.

Given the proximity of this Kite to the pair of Kestrels I've been watching over the last couple of days, I suppose it was inevitable that there would be a clash between them - though I don't know if it was over territory or food... I followed the Kite as it drifted further and further along the headland towards the Kestrel's area, and suddenly, there was one of the Kestrels swooping on him. There ensued a short but very fast moving scuffle, but despite my best efforts, I only got one (rather indistinct) picture. Thereafter, the Kite wheeled away and returned to the point I first saw him, about 300m away and the Kestrels no longer seemed bothered by him.