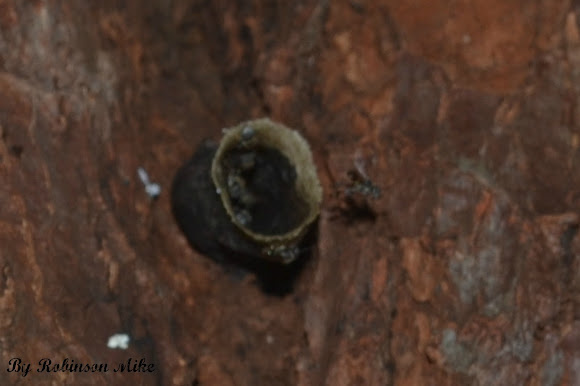 Stingless bees, sometimes called stingless honey bees or simply meliponines, are a large group of bees (approximately 500 species), comprising the tribe Meliponini (or subtribe Meliponina according to other authors). They belong in the family Apidae, and are closely related to common honey bees, carpenter bees, orchid bees and bumblebees.The common name is slightly misleading as male bees and bees of other species, such as those in the family Andrenidae, can not sting. Meliponines have stingers, but they are highly reduced and cannot be used for defense.

Stingless bees usually nest in hollow trunks, tree branches, underground cavities, or rock crevices but they have also been encountered in wall cavities, old rubbish bins, water meters, and storage drums. Many beekeepers keep the bees in their original log hive or transfer them to a wooden box, as this makes it easier to control the hive.[11][12][13] The bees store pollen and honey in large egg-shaped pots made of beeswax, typically mixed with various types of plant resin (sometimes called "propolis"). These pots are often arranged around a central set of horizontal brood combs, where the larval bees are housed. When the young worker bees emerge from their cells, they tend to remain inside the hive, performing different jobs. As workers age, they become guards or foragers. Unlike the larvae of honey bees, meliponine larvae are not fed directly. The pollen and nectar are placed in a cell, an egg is laid, and the cell is sealed until the adult bee emerges after pupation ("mass provisioning"). At any one time, hives can contain anywhere from 300-80,000 workers, depending on species.

In a simplified sense, the sex of each bee depends on the number of chromosomes it receives. Female bees have two sets of chromosomes (diploid) - one set from the queen and another from one of the male bees or drones. Drones have only one set of chromosomes (haploid), and are the result of unfertilized eggs, though inbreeding can result in diploid drones. Unlike true honey bees, whose female bees may become workers or queens strictly depending on what kind of food they receive as larvae (queens are fed royal jelly and workers are fed pollen), the caste system in meliponines is variable, and commonly based simply on the amount of pollen consumed; larger amounts of pollen yield queens in the genus Melipona. There is also a genetic component however, and as much as 25%[14] (typically 5-14%) of the female brood may be queens. Queen cells in the former case can be distinguished from others by their larger size, as they are stocked with more pollen, but in the latter case the cells are identical to worker cells, and scattered among the worker brood. When the new queens emerge, they typically leave to mate, and most die.[15] New nests are not established via swarms, but by a procession of workers who gradually construct a new nest at a secondary location. The nest is then joined by a newly mated queen, at which point many workers take up permanent residence and help the new queen raise her own workers. If a ruling queen is herself weak or dying, then a new queen can replace her.[citation needed] For Plebeia quadripunctata, although less than 1% of female worker cells produce dwarf queens, they comprise six out of seven queen bees, and one out of five proceed to head colonies of their own. They are reproductively active but less fecund than large queens.

Could be a sweat bee hive or sting-less bee hive.