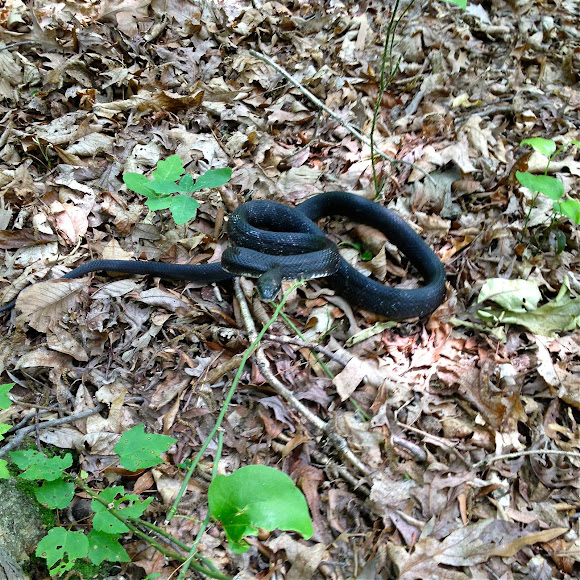 This is a harmless rat snake. In the first picture, he has assumed a classic defensive position - front half of the body held upright in a wavy curve. It's what most people would mistake for an aggressive striking posture. But really this is the snake's way of saying "Hey you startled me! And you're bigger than me and scary so please leave me alone since I'm super tough and dangerous." They even vibrate their tail in the leaf litter, which makes them sound like a rattlesnake. If you then went on to "attack" the snake by trying to pick him up or chase him, then he might very well bite you, but most of the time he won't. So if you see a snake like this then give him a bit of room so he feels safe again and he'll continue on his way. After this little bit of defensiveness, he got used to me and I walked next to him as he slithered around since I wanted to get a closer look at his head injury. After a few minutes, he seemed to realize I wasn't a threat and curiosity took over. In the second picture, he's just a few inches away from the phone I was using to take pictures, using his tongue to try to figure out what this strange thing was that was following him around. Be kind to snakes and they will usually return the favor!