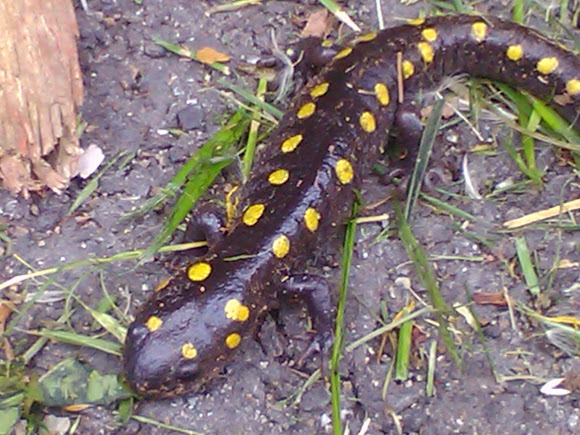 About 9 inches long. Fire salamanders live in central European forests and are more common in hilly areas. They prefer deciduous forests, since they like to hide in fallen leaves and around mossy tree trunks. They need small brooks or ponds with clean water in their habitat for the development of the larvae. Whether on land or in water, fire salamanders are inconspicuous. They spend much of their time hidden beneath stones, wood or other objects. They are active in the evening and the night, but on rainy days they are active in daytime as well. The diet of the fire salamander consists of various insects, spiders, earthworms and slugs, but they also occasionally eat newts and young frogs. Small prey will be caught within the range of the vomerine teeth or by the posterior half of the tongue, to which the prey adheres. It weighs about 40 grams. The fire salamander can grow to be 15–25 centimetres (5.9–9.8 in) long. It is possible that the common name of this species, fire salamander, derives from old tales of these amphibians. The salamanders hide within holes and crevasses in damp wood and tree trunks. When humans cut down wood to use for heating, the salamanders often remained hidden within. When a fire was lit, the heat forced the animals to leave the wood and crawl to safety. Because of this they appeared as though they were "crawling from within the flames``

Forests, under rocks, Logs, in tree stumps or hills

I found it while i was getting my bike out.

Lovely spotting! The Fire salamander is a European species so this is most likely a spotted salamander.