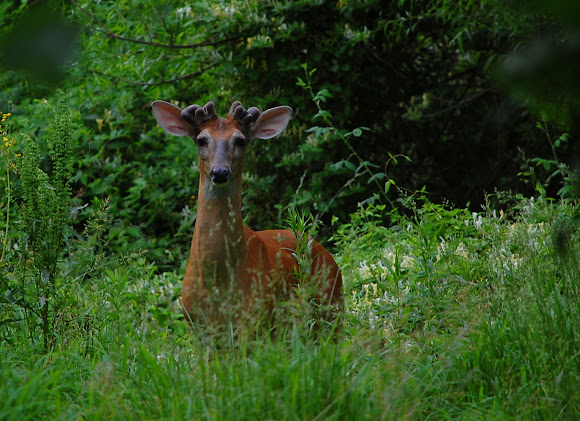 The white-tailed deer is highly variable in size, generally following Bergmann's rule that the average size is larger further away from the Equator. North American male deer (also known as a buck or stag) usually weighs 60 to 130 kg (130 to 290 lb) but, in rare cases, bucks in excess of 159 kg (350 lb) have been recorded. The deer's coat is a reddish-brown in the spring and summer and turns to a grey-brown throughout the fall and winter. The deer can be recognized by the characteristic white underside to its tail, which it shows as a signal of alarm by raising the tail during escape.

This big fella gave me the stare down and it was so neat! I was about 40 feet from him and we seen each other clearly. He was chewing his leaves and staring at me while another smaller buck walked up about 30 feet behind this one.