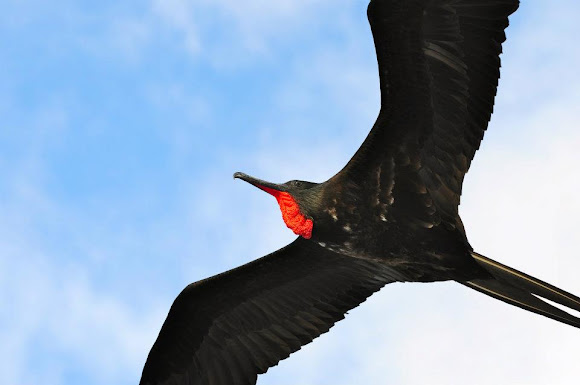 The Great Frigatebird (Fregata minor) is a large deceptive seabird in the frigatebird family. Major nesting populations are found in the Pacific (including Galapagos Islands) and Indian Oceans, as well as a population in the South Atlantic. The Great Frigatebird is a lightly built large seabird up to 105 cm long with predominantly black plumage. The species exhibits sexual dimorphism; the female is larger than the adult male and has a white throat and breast, and the male's scapular feathers have a purple-green sheen. In breeding season, the male is able to distend its striking red gular sac. The species feeds on fish taken in flight from the ocean's surface (mostly flyingfish), and indulges in kleptoparasitism less frequently than other frigatebirds. They feed in pelagic waters within 80 km (50 mi) of their breeding colony or roosting areas.

Hi Joshua, can you give me the link to the Mission 'Birds of Ecuador'?

Hi Albert! This would be an excellent addition to the Birds of Ecuador mission! If you have time, I would love for you to add your other wonderful spottings to the mission. Keep posting!

Charles Darwin Foundation for the Galapagos 8 years ago