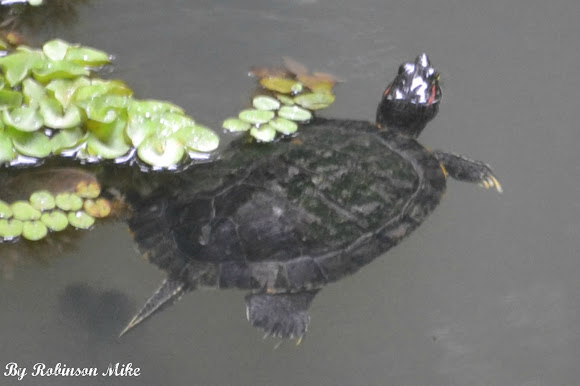 The female red-eared slider grows to be 25–33 cm (10–13 in) in length and males 20–25 cm (8–10 in). The red stripe on each side of the head distinguishes the red-eared slider from all other North American species. The carapace (top shell) is oval and flattened (especially in the male), has a weak keel that is more pronounced in the young, and the rear marginal scutes are notched. The carapace usually consists of a dark green background with light and dark, highly variable markings. The plastron (bottom shell) is yellow with dark, paired, irregular markings in the center of most scutes. The plastron is highly variable in pattern. The head, legs, and tail are green with fine, yellow, irregular lines. Some dimorphism occurs between males and females. Male turtles are usually smaller than females, but their tails are much longer and thicker.[5] Claws are elongated in males to allow a better grip on the carapace of females during mating. Typically, the cloacal opening of the female is at or under the rear edge of the carapace, while the male's opening occurs beyond the edge of the carapace. Older males can sometimes have a melanistic coloration, being a dark grayish-olive green, with markings being very subdued. The red stripe on the sides of the head may be difficult to see or be absent.

Red-eared sliders are almost entirely aquatic, but leave the water to bask in the sun and lay eggs. These reptiles are deceptively fast and are also decent swimmers. They hunt for prey and will attempt to capture it when the opportunity presents itself. They are aware of predators and people, and generally shy away from them. The red-eared slider is known to frantically slide off rocks and logs when approached. Contrary to the popular misconception, red-eared sliders do not have saliva. They, like most aquatic turtles, have fixed tongues, so they must eat their food in water.