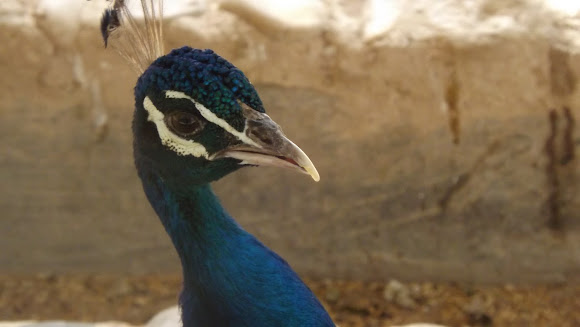 Peafowl are two Asiatic and one African species of flying bird in the genus Pavo of the pheasant family, Phasianidae, best known for the male's extravagant eye-spotted tail covert feathers, which it displays as part of courtship. The male is called a peacock, the female a peahen, and the offspring pea chicks.[1] The adult female peafowl is grey and/or brown. Peachicks can be between yellow and a tawny colour with darker brown patches or light tan and ivory, also referred to as "dirty white". The term also embraces the Congo Peafowl, which is placed in a separate genus Afropavo.\ White peacocks are not albinos or leucistics. Albino animals and birds have a complete lack of color and red or pink eyes. White peafowl have blue eyes. The white color appears in other domestically bred peafowl but in different quantities. Chicks are born yellow and become white as they mature, according to the Peafowl Varieties Database. Indian peafowl of all colors, including white, have pink skin. http://en.wikipedia.org/wiki/Peafowl

Plz For more help me

Yes I know what you mean :)

I didn't mean the pictures Ali - just the text.

Thank you @Mark I do not copy other sites around the city, we got this picture from a park

Hi Ali. Nice face shots. If you copy and paste from another website it is important to put it in quotes and say where it came from (in this case Wikipedia) Also you could remove the wiki references like [1] for example as they don't make sense here. Thanks! :)