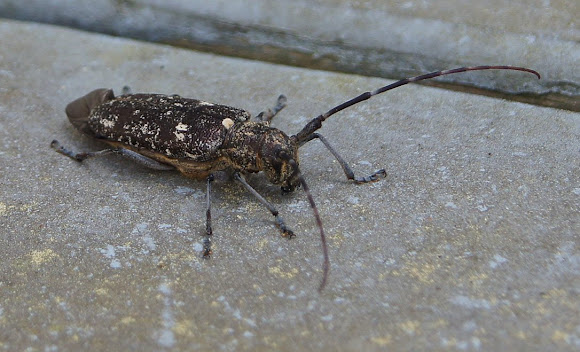 I thought this was an Asian Longhorn Beetle, which is really bad, but come to find out this is just a very good lookalike. It is about 1 1/4 inches long, and the way to tell the difference is that the sawyer has a white spot at the center top of the wings, next to the head. These beetles lay their larvae in dead or dying pines, which we have plenty of in our yard. I think this is the female. The male does not have as many spots.

M. scutellatus is a saproxylic insect, which means that at least part of its life cycle is dependent on either dead or dying wood.[4] For these beetles to successfully colonize a new habitat, such as an area that has been burned by forest fire, it must be of high enough quality and in close enough range. Studies have shown that several Monochamus species use pheromones of bark beetles as kairomones to find suitable host habitats quickly and efficiently, enabling them to devote time and energy to other activities.[9] In the cases of succession after fires, the abundance of M. scutellatus is positively correlated with the severity of the fire, the abundance and size of the burned trees, and the distance between burned and unburned land.[4] However, more larvae tend to be found in areas with a larger percentage of unburned forest within 500 metres, which may be related to the dietary requirements of the adult beetles.[2] Adult females seem to prefer to lay their eggs in trees with thick bark and phloem, and consequently trees with diameters greater than 8 – 10 centimetres. These trees are more able to inhibit water loss during fires, preserving the quality preferred by females