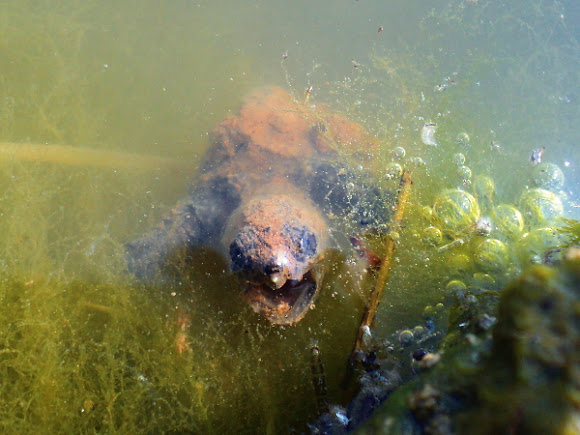 This little guy had just hatched, and was about two inches long. Snapping turtles get quite large though, we've seen them with a shell length over a foot. I found a turtle nest that looked like it had been dug up by an animal (dog-like tracks all around). On closer inspection, I found this little guy having a hard time extracting itself from the rapidly drying dirt. I gently picked him up and put him near the water. He quickly crawled from the egg into the water, where I took a ton of pictures.

Congratulations on your SOTW BlueAppaloosa. Great story, lucky you came along.

Oh wow, thanks! Spotting of the Week is so cool!

Congratulations BlueAppaloosa! Your little hatchling has been voted Spotting of the Week! Your efforts in describing your story are particularly appreciated.

Thanks for saving him!

Thanks! It was pretty cute!