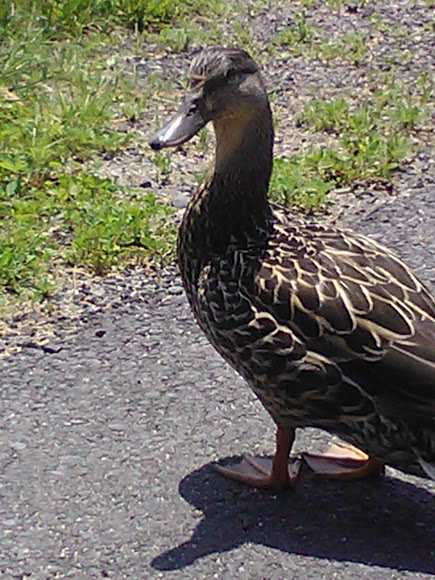 The Mallard is a medium-sized waterfowl species although is often slightly heavier than most other dabbling ducks. It is 50–65 cm (20–26 in) long (of which the body makes up around two-thirds), has a wingspan of 81–98 cm (32–39 in), and weighs 0.72–1.58 kg (1.6–3.5 lb).[9][10] Among standard measurements, the wing chord is 25.7 to 30.6 cm (10.1 to 12.0 in), the bill is 4.4 to 6.1 cm (1.7 to 2.4 in) and the tarsus is 4.1 to 4.8 cm (1.6 to 1.9 in).[11] The breeding male Mallard is unmistakable, with a glossy bottle-green head and white collar which demarcates the head from the purple-tinged brown breast, grey brown wings, and a pale grey belly. The rear of the male is black, with the dark tail having white borders.[12] The bill of the male is a yellowish orange tipped with black while that of the female is generally darker ranging from black to mottled orange. The female Mallard is predominantly mottled with each individual feather showing sharp contrast from buff to very dark brown, a coloration shared by most female dabbling ducks, and has buff cheeks, eyebrow, throat and neck with a darker crown and eye-stripe.[12] Both male and female Mallards have distinct iridescent purple blue speculum feathers edged with white, prominent in flight or at rest, though temporarily shed during the annual summer moult. Upon hatching, the plumage colouring of the duckling is yellow on the underside and face (with streaks by the eyes) and black on the backside (with some yellow spots) all the way to the top and back of the head. Its legs and bill are also black. As it nears a month in age, the duckling's plumage will start becoming drab, looking more like the female (though its plumage is more streaked) and its legs will lose their dark grey coloring.[12] Two months after hatching, the fledgling period has ended and the duckling is now a juvenile. Between three to four months of age, the juvenile can finally begin flying as its wings are fully developed for flight (which can be confirmed by the sight of purple speculum feathers). Its bill will soon lose its dark grey coloring and its sex can finally be distinguished by three factors. The bill coloring is yellow in males, black and orange for females. The breast feathers are reddish-brown for males, brown for females. The center tail feather is curled for males (called a drake feather), straight for females.

The Mallard is widely distributed across the Northern Hemisphere, North America from southern and central Alaska to Mexico, the Hawaiian Islands, and across Eurasia, from Iceland and southern Greenland and parts of Morocco (North Africa) in the west, Scandinavia to the north, and to Siberia, Japan, and China in the east.[8] It is strongly migratory in the northern parts of its breeding range, and winters farther south. For example, in North America it winters south to Mexico, but also regularly strays into Central America and the Caribbean between September and May. The Mallard inhabits a wide range of habitat and climates, from Arctic Tundra to subtropical regions. It is found in both fresh- and salt-water wetlands, including parks, small ponds, rivers, lakes and estuaries, as well as shallow inlets and open sea within sight of the coastline. Water depths of less than 1 meter (3.3 ft) are preferred, birds avoiding areas more than a few meter deep. They are attracted to bodies of water with aquatic vegetation.

I found her while i was visiting my Grandma. We were sitting outside when a duck came out of her neighbors ditch. It started wading over to us and it got close enough that I could take a picty