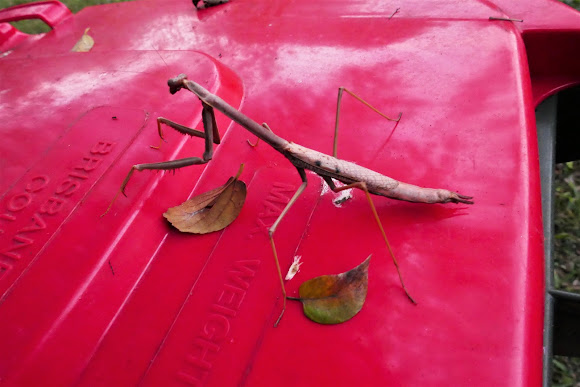 This is the largest mantis I have ever seen! Archimantis latistyla, commonly known as the large brown mantid, but also bunny mantis and Australian ghost hopper mantis, is native to Australia and belongs to the family Mantidae. It is an aggressive predator, and is even known to take down small birds. This spotting is a female, and I would estimate her length to be somewhere between 12-15 cms. She is short-winged - her wings reach only half way down her abdomen, and thus she is unable to fly, but the male has long wings that cover the entire abdomen, and he can fly. Note also the spots on the forewings - this is an easily identifiable characteristic of the species. This female has fallen from the tree above and landed on top of my rubbish bin. She was feisty!

Sorry, but definitely not the best photos. It was right on dusk and the light was fading fast, and I could not get my camera flash to work! My cats were also nagging me for dinner, so... priorities - they won!

Thanks, Kalen. It was a lucky find too! I got quite a surprise when I spotted her, as she raised her front legs at me.

Thanks, ornithoptera80. She certainly was.

That's why I chose to feed the cats. I'll fix the bin later!

If you didn't hear the lid frisbee past as you left then she let you off lighlty.

She didn't like me either, Mark, and did her ninja thing right in my face :-/ She's welcome to the bin!

Wow huge. Fallen schmallen.. she leapt down like a ninja and when your gone the lid is off that bin.