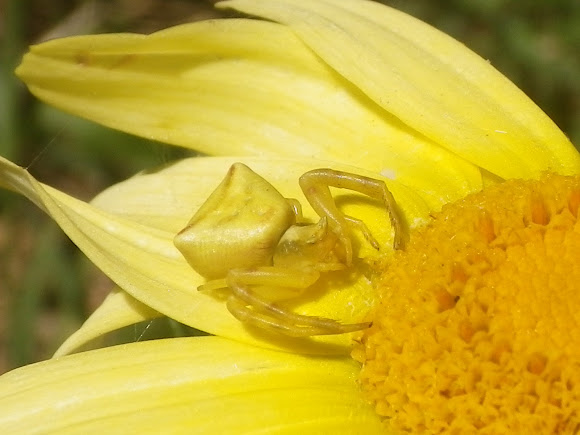 These spiders may be yellow or white, depending on the flower in which they are hunting. Especially younger females, which may hunt on a variety of flowers such as daisies and sunflowers, may change color "at will". Older females require large amounts of relatively large prey to produce the best possible clutch of eggs. They are therefore, in North America, most commonly found in goldenrod (Solidago sp.), a bright yellow flower which attracts large numbers of insects, especially in autumn. It is often very hard even for a searching human to recognize one of these spiders on a yellow flower. These spiders are sometimes called Banana Spiders because of their striking yellow color.

These spiders change color by secreting a liquid yellow pigment into the outer cell layer of the body. On a white base, this pigment is transported into lower layers, so that inner glands, filled with white guanine, become visible. If the spider dwells longer on a white plant, the yellow pigment is often excreted. It will then take the spider much longer to change to yellow, because it will have to produce the yellow pigment first. The color change is induced by visual feedback; spiders with painted eyes were found to have lost this ability. The color change from white to yellow takes between 10 and 25 days, the reverse about six days.

Mohamed A. M. Mostafa 9 years ago

Thank you all :D