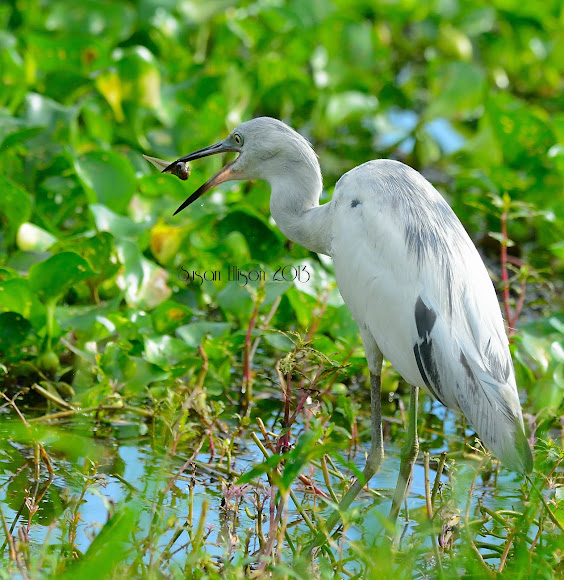 A smallish heron of the southeastern United States, the Little Blue Heron breeds in various freshwater and estuarine habitats. It is the only heron species in which first-year birds and adults show dramatically different coloration: first-year birds are pure white, while adults are blue. This species is about 60 centimetres (24 in) long, with a 102-centimetre (40 in) wingspan, and weighs 325 grams (11.5 oz). It is a medium-large, long-legged heron with a long pointed blue or greyish bill with a black tip. Breeding adult birds have blue-grey plumage except for the head and neck, which are purplish and have long blue filamentous plumes. The legs and feet are dark blue. Sexes are similar back. Non-breeding adults have dark blue head and neck plumage and paler legs. Young birds are all white except for dark wing tips and have dull greenish legs. They gradually acquire blue plumage as they mature.

advantage of white plumage is that young Little Blue Herons are more readily able to integrate into mixed-species flocks of white herons, thus gaining a measure of protection against predators.