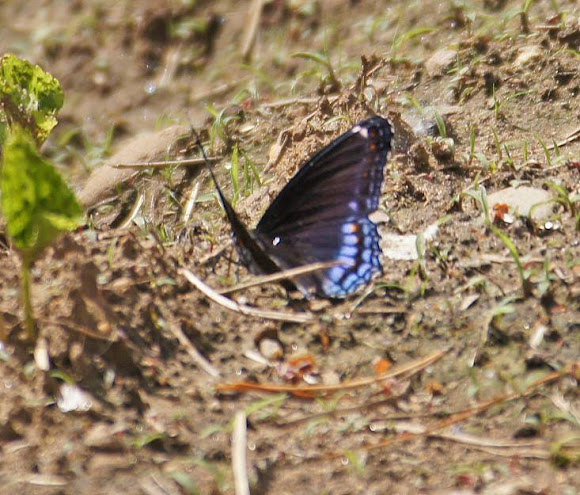 I was not aware that the common yellow swallowtail we are all familiar with actually came black as well. I thought this was a different species, but it is actually the female swallowtail. Male is yellow with dark tiger stripes. Female has 2 forms: one yellow like the male and the other black with shadows of dark stripes. Hindwing of both female forms has a row of striking blue chevrons and an iridescent blue wash over parts of the interior hindwing. The upperside hindwing has a prominent orange marginal spot that is generally larger than the row of pale marginal spots. On the underside of forewing of spring individuals the row of marginal spots may be merged into a continuous band, thus appearing similar to the Canadian Tiger Swallowtail. Wing Span: 2 1/2 - 4 1/2 inches (6.2 - 11.4 cm).

Hi June! Beautiful find!
This lovely butterfly is actually a subspecies of the White Adimiral,
Limenitis arthemis. Red-spotted Purples are a mimic of the Pipevine Swallowtail, but this butterfly lacks tails.

You are correct that Eastern Tiger Swallowtails have a dark form. However, they look quite a bit different from this butterfly. Here is an image of one to compare:
http://bugguide.net/node/view/782340/bgi...