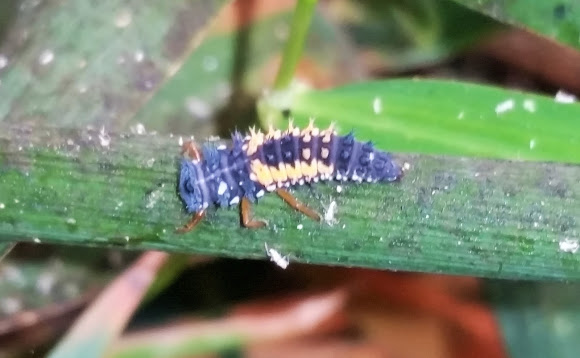 Brown legs and a blue and yellow body that is covered with minute tubercles or spines.

A native of eastern Asia, the multicolored Asian lady beetle, Harmonia axyridis, was introduced into the United States by the U.S. Department of Agriculture as a biological control agent. This tree dwelling beetle, of the family Coccinellidae, is an important predator of aphids and scale insects. It was originally released in Pennsylvania in 1978 and 1981, but the first overwintering beetles were not recorded until 1993. This beetle’s recent population increase in Louisiana, Pennsylvania, and other northern states may not have resulted from the earlier USDA releases. Instead, they are thought to be from a new source that was accidentally introduced in New Orleans from an Asian freighter.