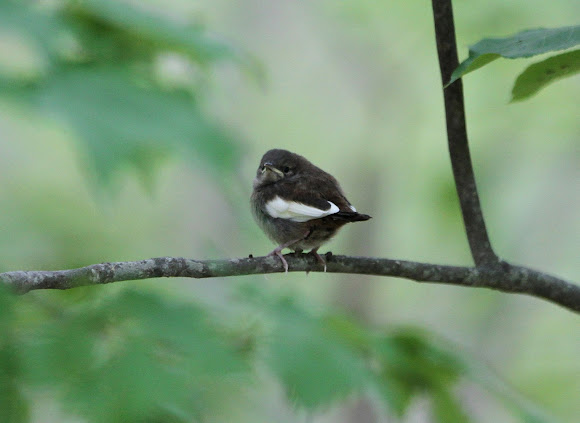 House wrens are small, compact brown birds with a fairly long, curved beak, short wings, and a long tail that they often have cocked above the line of their body. They have a very faint pale eyebrow and dark barring on their wings and tail. This fledgling had white wings, which is a sign of leucism.

Living in a gourd on my Mom's porch in a semi-rural area with lots of trees. This fledgling was able to fly, but didn't seem ready to leave home. The mother bird would fly up to the gourd, throw some food in at her screaming baby, and then leave. She seemed ready for it to move out! Several days after this spotting, I observed this bird in the woods along with its mother, who was still feeding it. They had moved out of their gourd nest and into the woods, which were about 20 feet from where the gourd hung. The fledgling stayed in the same location, just hopping around, while the mother would bring it food. It was the last fledgling to stay with the mother bird.

"The reduction of pigment in leucistic birds causes feathers to weaken and be more prone to wear. In some situations this can hinder flight, which, in addition to leucistic birds usually being more conspicuous, can heighten risk of predation. There is also evidence that leucistic birds might, on occasion, not be recognized or accepted by a potential mate...Albinos have pink eyes while the iris pigmentation of leucistic birds remains dark." - The British Trust for Ornithology http://www.bto.org/volunteer-surveys/gbw...

I wasn't able to get any additional shots, but I did observe this fledgling with the mother bird in the woods this past weekend. She was still feeding it, but all other siblings were gone. I'm labeling it as having leucism since the eye is dark.

Thanks so much for the info and links Malcolm. I was also told it could be piebald, but I thought that meant white spots on a dark background, so I'm not sure. I'm going to try to get some better shots of it today, if possible, as it seems to be the only baby that hasn't left the mom.

Another article here explains the difference between leucism and albinism, so look at the eyes. http://www.bto.org/volunteer-surveys/gbw...

More about it here, near the bottom of the page: http://www.rspb.org.uk/discoverandenjoyn...

This condition is called partial albinism over here (EU).

Would this be considered a leucistic bird?