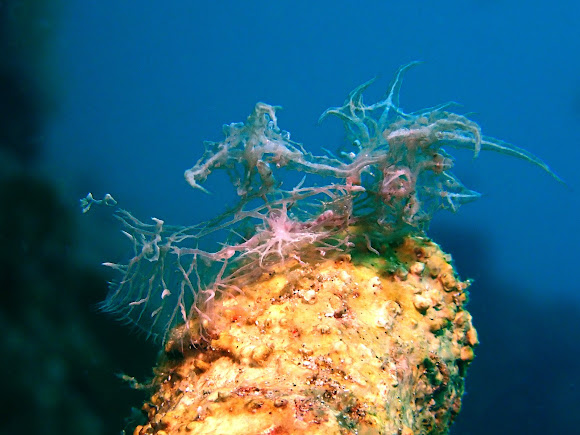 This Nudibranch, Melibe colemani is a highly sought after critter among Nudibranch enthusiasts and underwater macro photographers. It is also rarely seen by chance but at specific locations, it can be reliably seen as this animals tends to stay at one place for a long time on its food source, possibly Xenia corals. There are avid underwater photographers who refers to this Nudibranch as the Holygrail of Nudibranch! This unbelievable species doesn't even look like an animal, let alone a nudibranch. One would think it is just a string of snot in the water. In this picture, the Rhinopores (head side) is to the left. All species of Melibe have an Oral Hood which they spread out over the sand or other substrate and pull back like a fishing net to feed. Little crustaceans and other food trapped within is then moved to the oral opening. They do not have a jaw, so their prey is consumed in one piece.

Recorded in Malaysia, Philippines and Indonesia. Likely to be found among coral rubbles next to its possible food source, Xenia corals.

In the words of Neville Coleman, the person who first found this species at Mabul Island, Malaysia : "..."Of all the creatures I have discovered perhaps the most favorite and most bizarre is Colemans Melibe. Although I have used my name as the common name, it does not necessarily mean that when it is finally described that it will remain as that. However, as it does not have a reference name it will do for the time being. I was on a second (nice and easy) dive of the day at the jetty drift at Mabul Island in Malaysia with my very keen dive guide Cindy from SMART DIVERS. The dive is made up of drifting along a coral/soft coral reef slope with lots of crevasses and a few small canyons and gutters, which angled down to a soft bottom at around 15 to 18 metres. As usual we were searching for nudibranchs though most of those found were species relatively common to Mabul. I checked my air and noticed I was down a bit, but as it was the end of the dive I just kept skip breathing along as is my habit and searching everything I could, knowing that I had only 12 to 15 minutes of air left. There was a brilliant little species of transparent sea squirt with opaque white markings that I was interested in (Banded Ascidian Ecteinascidia bandanensis) and it appeared to live in small clumps of threes in the brown encrusting soft coral Briarium sp. Swimming past one large colony of the soft coral I noticed that there was something white sticking out between the polyps that did not appear as though it should be there. It was just a non descript small piece of transparent tissue with some opaque white markings that I assumed was the little sea squirt. However, something seemed different and I breathed out and sank down a little to investigate. Once I was looking at the object through my bi-focals I could see it was certainly not a sea squirt. I waved some water over the polyps and some retracted a little and I could see more of the object. My heart went berserk; it appeared to be some kind of soft bodied creature that resembled nothing in my visual vocabulary what so ever. However, it seemed to be half dissolved and for some moments I wondered if it was just decomposing tissue. I tenderly touched all the polyps surrounding the object so as to get a better look. Once it was revealed it began crawling and at that moment I knew it was an extraordinary nudibranch, but what to do? I had only a few minutes of air left and already the guide was signaling time to go up to meet the pickup boat. I signaled to Cindy and showed her what I had found, begged a few more minutes bottom time and went to work with my NIKONOS 111 with 2.8 lens and wire frame. The challenge was to get it to actually look like something. Even though I photographed it from every angle, I knew that from a horizontal position the aspect was not descriptive enough, but it appeared to be so fragile that the slightest touch would cause it to disintegrate..." Neville Coleman passed away in 2012 only little over a month before the species was named after him.

Thanks, @Lauren for your appreciation :)