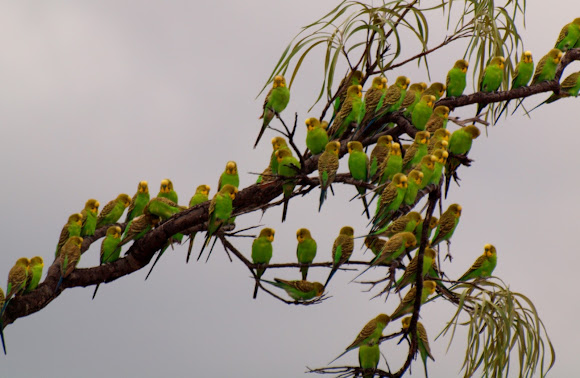 Budgerigars are small green and yellow parrots, with black barring above, and a small patch of blue on the cheek. The male has a dark blue cere (skin at the base of the upper mandible surrounding the nostrils). In the female this is brownish when breeding and light blue otherwise. Young Budgerigars are similar to the adult birds, but are duller and have a dark brown eye (which is white or yellow in adults).

Budgerigars are nomadic and large flocks of birds can be seen in most open habitat types, but seldom far from water. Very large flocks, numbering occasionally in the tens of thousands, are seen after a season of abundant rainfall and food. Flocks are usually much smaller, however, and range from as few as three birds up to 100 or more. Birds in a flock fly in a characteristic undulating manner.

Feeding: Budgerigars feed almost exclusively on the seeds of native herbs and grasses, such as porcupine grass and saltbush. Seeds are mostly eaten from the ground and the bulk of drinking and feeding activity is in the morning. Breeding: Budgerigars tend to breed in response to rainfall, and may produce several broods if conditions permit. The nest is a bare cavity in a suitable tree branch or in the trunk. The female sits on the round white eggs. As with other parrots, young budgerigars are born naked and helpless.

Leanne, there were probably 1500 or more in this flock, keep an eye out, they should be near you due to it being so dry out west, and have extended eastward from there normal range

Really great spotting MacC. I would dearly love to see them in the wild.

Thanks Kerry, I saw quite a lot that day

Fantastic shot, so hard to get a shot like this, they are so active. It's great to see them in a large group in the outback. I love it every time!

What an awesome sight!

Wow, Mac, now that is a shot and a half. I agree with Mark - that's how budgies should be seen. Cheers for the notes too :-)

Thanks Mark, had a great day out @ Maytown

That's how budgies should be seen. Good one Mac!