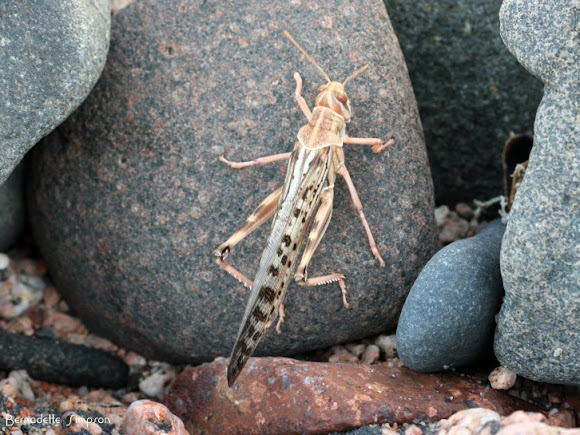 "The desert locust lives a solitary life until it rains. Rain causes vegetation growth and allows the female to lay eggs in the sandy soil. The new vegetation provides food for the newly hatched locusts and provides them with shelter as they develop into winged adults. When vegetation is distributed in such a way that allow the nymphs, usually called hoppers, to congregate, and there has been sufficient rain for most eggs to hatch, the close physical contact causes the insects' hind legs to bump against one another. This stimulus triggers a cascade of metabolic and behavioral changes that cause the insects to transform from the solitary form to the gregarious form. When the hoppers become gregarious, they change from green-coloured to yellow and black, and the adults change from brown to red (immature) or yellow (mature). Their bodies become shorter, and they give off a pheromone that causes them to be attracted to each other, enhancing hopper band and subsequently swarm formation." ~wiki

spotted along the Gulf of Aqaba shore; "locust adults and swarms regularly cross the Red Sea between Africa and the Arabian Peninsula" ~wiki

Went for a stroll along the shore and was surprised to see dozens of locust carcasses scattered among the rocks, only saw the one locust alive. Reports of current locust swarms in south Sinai and the difficulty trying to contain them: http://english.ahram.org.eg/News/73300.a...

Very cool! Thanks for letting me know, Larry!

Hi Bernadette, Congratulations on having your spotting as the focus of the Project Noah fact of the day on our Facebook pages!!!!!