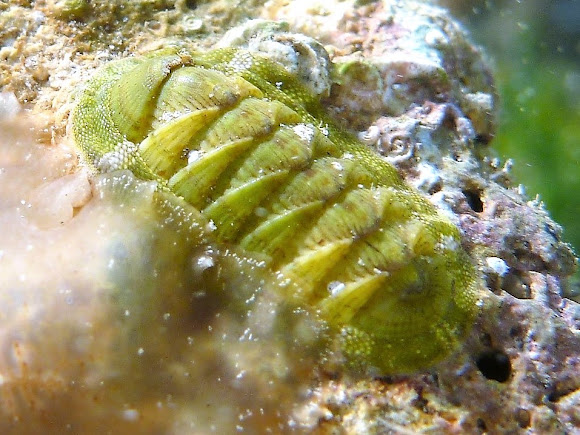 Polyplacophora. The shell, which does not cover more than the upper part of the animal, reaches a length of 3 to 4 cm and its special structure is made up of eight arched and mobile plates placed like the tiles of a roof. When she feels in danger she can practically roll into a ball. The color of the shell is highly variable. It ranges from yellow ocher to olive gray and can also be black, red, yellow, or orange. It has transversal and longitudinal grooves. The second and seventh plates usually have a contrasting color. This mollusk lives fixed on the stones and rocks beaten by the surf. It feeds on algae. Its class is the only one within mollusks that has metamerization pockets. There are about 600 described species. Among the most frequent species in the Mediterranean are Chiton olivaceus, Acanthochitona fascicularis, Lepidochitona caprearum or L. corrugata, Ischnochiton rissoi, Lepidopleurus cajetanus, etc.

They appear strongly attached to rocks or under stones. Rocky coast of the mediterranean see. Isla Plana (Murcia).