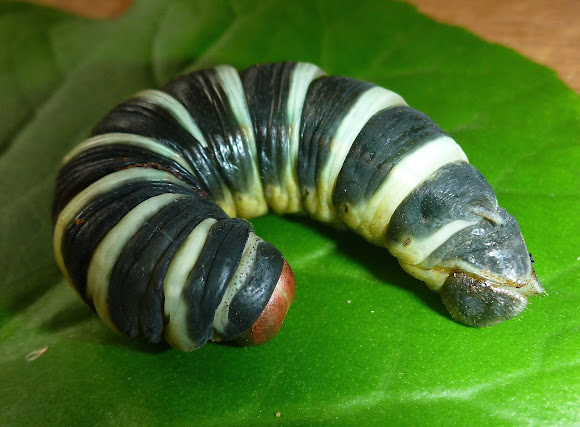 This larva is just amazing. It is striped black with yellow-green and has an orange-red head capsule. It was 10 cm long when extended and as thick in the center of the body as my thumb. The prolegs are short and yellowish and the caudal horn is very small. It is in a pre-pupal stage.

On the ground in the City Park of "El Llano", Oaxaca City, Oaxaca. It is a last instar larva and was apparently migrating to a place to pupate.

It has a very unpleasant habit of throwing itself rather violently from side to side when touched. Creepy. Pseudosphinx tetrio is similar in color, black with yellow-green bands, but P. tetrio has an orange thoracic plate, the caudal segments are orange, it has long orange pseudopods and most importantly, the caudal horn is long, black and whip-like. The only reference I found for this larva is a 2010 mention from Honduras as a "Mystery Sphinx" (http://www.simplegiftsfarm.com/-caterpil...). I put the larva in a large bowl with dirt and leaf litter. It buried itself almost immediately and hopefully will pupate. On 26 June 2013, I dug around in the container with dirt and found the pupa of this larva. It is dark brown, long and narrow and lacks the external loop some sphinx pupae have for their mouthparts. It is 7 cm long. Time to wait.

Thank you Franziska, you found it! The picture of the pre-pupal larva in your link certainly looks just like it, color and the short caudal horn as well. The adult will hopefully emerge in a few months. It obviously has a large distribution - at least Mexico down through Paraguay.

This larva has now pupated, probably within hours of putting it into soil on June 7th. The pupa is 7 cm long! See last picture.