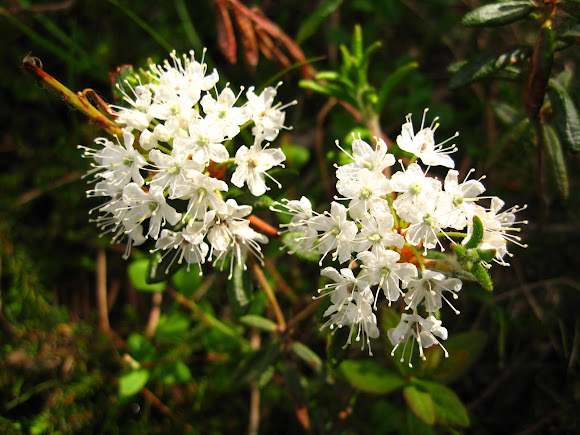 Rhododendron groenlandicum (Bog Labrador tea, formerly Ledum groenlandicum or Ledum latifolium), is a flowering plant in the subsection Ledum of the large genus Rhododendron in the family Ericaceae. It is a low shrub growing to 50 cm (rarely up to 2 m) tall with evergreen leaves 20–60 mm long and 3–15 mm broad. The leaves are wrinkled on top, densely hairy white to red-brown underneath, and have a leathery texture, curling at the edges. The tiny white flowers grow in hemispherical clusters and are very fragrant and sticky. It is found growing in northern latitudes right around the world. In Europe, it occurs south to the Alps, and in the United States, it reaches as far south as northern Pennsylvania, Ohio and New Jersey in the east, and Oregon in the west. It grows in bogs and on wet shores, and sometimes on rocky alpine slopes. It is often used as a spice in dishes containing wild game. It is also used as flavoring in distilled spirits. For its traditional uses in herbal medicine, see Labrador Tea.