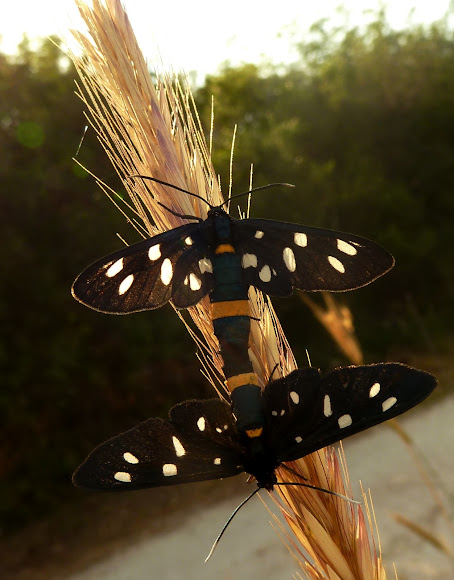 It is a moth in the family Arctiidae also known as "woolly bears". It reaches a wing span of 35 - 40 mm. Its wings are blueish black with white spots. A further feature is the prominent yellow ring at the abdomen. The black antennae have white tips. The Nine-spotted moth uses mimicry to imitate the Zygaena ephialtes [ http://www.projectnoah.org/spottings/267... ] which is a poisonous moth. On the photos is shown its copulation.

It is found in southern Europe but also seen up to northern Germany, and in the East to Anatolia and the Caucasus, and there are some populations in the South-Eastern Dutch nature reserves "Leudal" and "De Meinweg" The species prefers drier areas, open ranges with shrubs and trees as well as open forests and slopes.