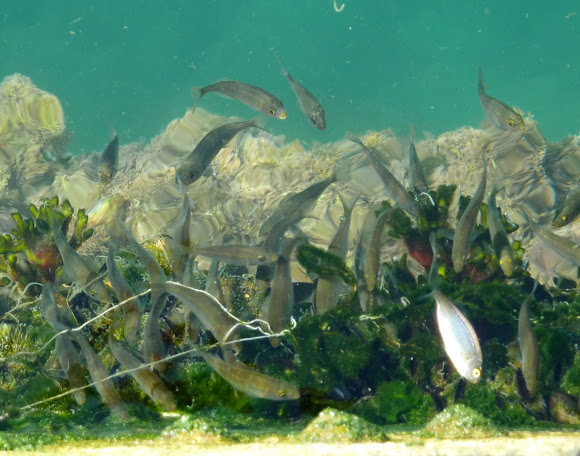 It is a species of bream, recognisable by the golden stripes that run down the length of its body, and which can cause hallucinations when eaten. It can grow up to 51 cm long and up 3 kg of weight. Not a solitary fish, it moves together with other creating so the illusion of a bigger organism

Widely spread species from Europe to the coasts of South Africa. It is a very common fish found in every harbor.

Sarpa salpa was reportedly consumed as a recreational drug during the time of the Roman empire. The fish became widely known for its psychoactivity following widely publicized articles in 2006, when two men ingested it at a Mediterranean restaurant and began to perceive many auditory and visual hallucinogenic effects. These hallucinations, described as frightening, were reported to have occurred minutes after the fish was ingested and had a total duration of 36 h. Ichthyoallyeinotoxism, or hallucinogenic fish poisoning is common in other species of fish but not in Sarpa salpa, which is not normally psychoactive. It is, in fact, often served as a dish at seafood restaurants in the Mediterranean area. It is presently believed that the fish ingests a particular algae or phytoplankton which renders it hallucinogenic. The effects described are similar to those of indole tryptamine psychedelics. Related spotting: http://www.projectnoah.org/spottings/230...