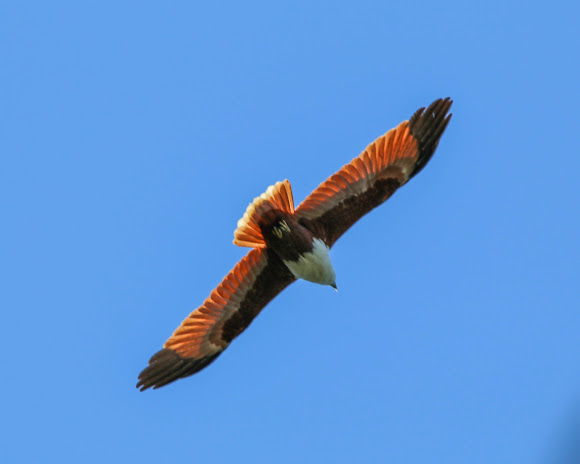 The Brahminy Kite is one of the medium-sized raptors (birds of prey), with a white head and breast. The rest of its body is a striking chestnut brown. The very tip of its tail is white. The wings are broad, with dark 'fingered' wing tips and the tail is short. The legs are short and not feathered, the eye is dark and the lemon yellow coloured bill is strongly hooked. It sails on level wings along shorelines and mudflats.

Spotted at Terranora Broadwater. Initially in trees near water. Mangrove and rainforest habitat nearby.

Two birds were heard before they were seen in trees before taking to flight.

This ones wings seem to be in near perfect condition which I don't see often with big birds of prey around here.

Thanks a lot mark! Very disappointed that i didn't get a shot when it had landed but it was too high up