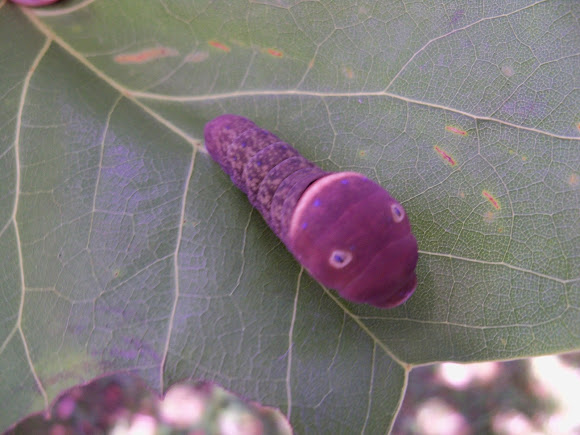 The tiger swallowtail, or eastern tiger swallowtail (Papilio glaucus) is a species of the papilionid butterfly family native to North America. It is large butterfly (wingspan 7.9 – 14 cms), and one of the most familiar butterflies in the eastern United States, where it is common in many different habitats. It flies from spring to fall, during which time it produces two to three broods. Adults feed on the nectar of many species of flowers. Males are yellow with four black "tiger stripes" on each fore wing. Females are dimorphic in coloration, and can be found in as either a yellow or black morph. The yellow morph is similar to the male, while the dark form, which has long been thought to mimic the poisonous pipevine (blue) swallowtail, (Battus philenor), is almost completely black. The eastern tiger swallowtail lays her green eggs singly on hostplants in many woody plant families, most commonly on Magnoliaceae and Rosaceae (for example, poplars, mountain ash, birch, cherry, tulip tree, ash, basswood, apple, maple, willow, magnolia, and occasionally sassafras). Young caterpillars (first three instars) are brown and white, with a coloration pattern that mimics bird droppings to help protect it from predators. In later instars, caterpillars are green with two black, yellow, and blue eyespots on the thorax, thought to deter birds. Caterpillars reach a length of 5.5 cm.

Resident throughout North America (Scott 1986), except in the Western United States south of British Columbia and West of the Rocky Mountains. Habitats are DECIDUOUS WOODED AREAS. Host plants include species from many families. Hosts are usually trees or shrubs. Eggs are laid on the host plant singly. Individuals overwinter as pupae. There are are multiple flights each year with the approximate flight time MAY1-AUG30 in the northern part of the range and MAR1-NOV30 in the southern part of their range (Scott 1986).

This caterpillar fell from a tulip poplar tree onto the deck where I was sitting.

It was nice, he practically fell into your lap!

Strange caterpillar... still not sure which way it's going :)

Very nice series; I had never seen the caterpillar for this butterfly - very cool coloring!

Mohamed A. M. Mostafa 8 years ago

Awesome! I want one!