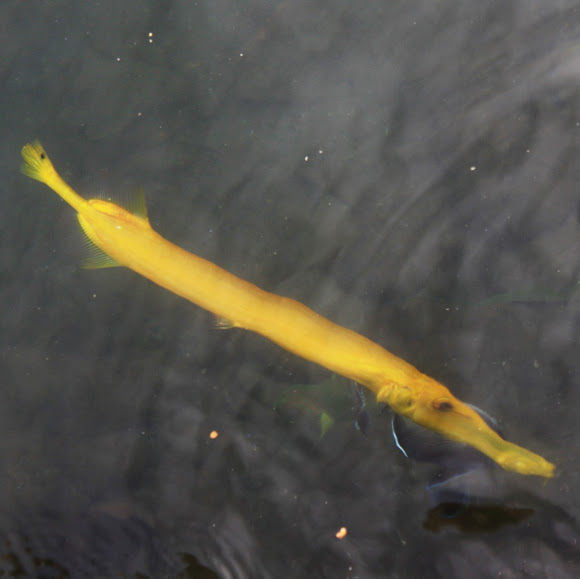 Aulostomus chinensis is a medium-sized fish which grows up to 80 cm in length. Its body is elongated and compressed laterally, with a long, tubular snout which has a small barbel at its inferior extremity. The protusible mouth can be extended forward to catch prey. On the top posterior part of the body, the dorsal fin is composed of two parts, the first anterior is a set of isolated spines and the second is a small ray fin. This latter fin is similar in shape to the anal fin which is just under. The pelvic fins are located in the middle of the body and are small, with one basal black spot. The compound set of the long caudal peduncle and the caudal fin is yellowish, whatever the fish coloration. At least one black spot is on the top of the caudal fin, and sometimes a sometimes a second spot occurs on the low part. The body coloration can be uniform or mottled in a range of grey, brown, or dark green. Some fish are uniformly bright yellow

This species is found in tropical and subtropical waters from the Indian Ocean and the Pacific Ocean. It lives in clear and calm waters in rocky and coral reefs from the surface to 120 m depth.