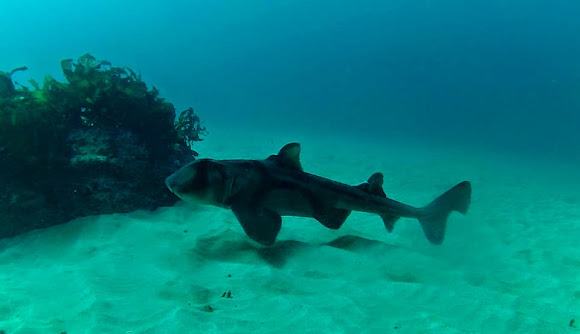 Heterodontus portusjacksoni, commonly known as the "Port Jackson shark", is a nocturnal, oviparous (egg laying) type of bullhead shark of the family Heterodontidae, found in the coastal region of southern Australia, including the waters off Port Jackson in Sydney. It has a large, blunt head with prominent forehead ridges and dark brown harness-like markings on a lighter grey-brown body, and can grow up to 1.65 metres (5.5 ft) long. This is a migratory species, travelling south in the summer and returning north to breed in the winter. Newborns are called pups. It feeds on hard-shelled molluscs, crustaceans, sea urchins, and fish. (Wikipedia) The name Heterodontus means "different teeth", and the second reference link (to the Australian Museum) has an excellent photo of the teeth. Note that they are not serrated - the anterior teeth are small and pointed whereas the posterior teeth are broad and flat. They function to hold and break, then crush and grind the shells of molluscs and echinoderms. The site also has an interesting video. This family Heterodontidae has eight species, all in the genus Heterodontus, three of which are found in Australian waters. The other two local species are the "zebra horn shark" (H. zebra), and the "crested horn shark" (H. galeatus).

This spotting was located off the (south) Avoca Beach headland, on the NSW Central Coast. The species is endemic to the temperate waters around southern Australia and can be found in an area stretching from southern Queensland, south to Tasmania, and west to the central coast of Western Australia. Rocky environments are the most common habitat, though sandy and muddy ones, as well as seagrass beds, are sometimes used. (Wikipedia)