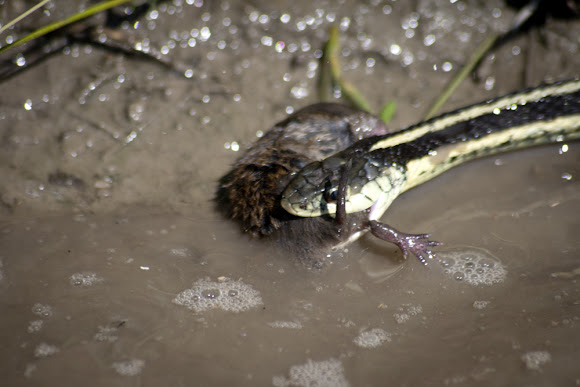 Snake was about a foot long, black with yellow stripes. Mouse was small, brown, with a short tail.

A non-poisonous snake native to North America. Found through southern Canada year round, but hibernate during the winter. They are found in about just any environment, except water.

It was something unbelievable to watch this struggle. The snake was trying to grab this mouse, even though the mouse is significantly larger, drag him to the puddle, and hold him underneath. The mouse would shake free, jump out, and run into the bush, where the snake would catch him again, and repeat his attempt. There were a few passers-by watching, and one of them finally couldn't stand it anymore -- pity for this mouse --who was all wet and squealing-- took over and helped it free. If not for this interference, perhaps the snake would be able to succeed.