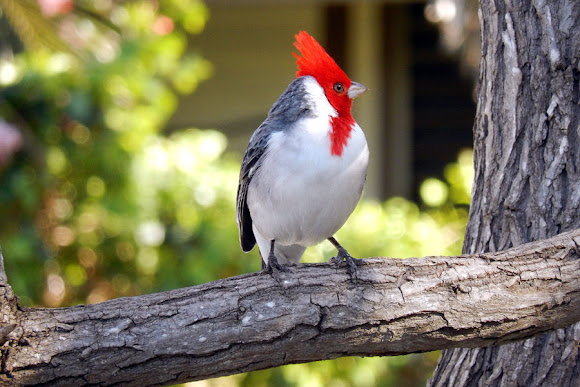 Red-Crested Cardinal hanging out near Sea Life Park, Oahu, Hawaii. The Red-Crested Cardinal is a bird species in the tanager family which has been introduced to Hawaii. Notwithstanding its common name, it is not very closely related to the true cardinals. These are common all over the island of Oahu, and we see them on a near daily basis.

It is found in northern Argentina, Bolivia, southern Brazil, Paraguay and Uruguay. Its natural habitats are subtropical or tropical dry shrubland and heavily degraded former forest. Among other regions, it is found in southern part of the Pantanal, and has been introduced to Hawaii and Puerto Rico.

This Red-Crested Cardinal was hanging out near one of the snack bars at Sea Life Park, Oahu. He has obviously been conditioned to wait for tourists to leave him snacks!

I never saw this one before, it is really lovely and striking!

Thanks to all who have commented and favorite this picture, I had no idea it would be so popular!

Yes, these are my daughter's favorite birds on the island--I think because she is a "red-head" too. She always calls them handsome!

Such a handsome fella !