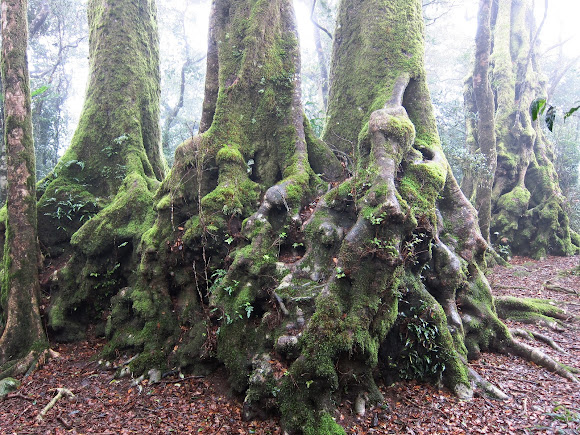 Antarctic Beech trees, between 2500- 3000 years old (depending on the source). These trees are ancient relics of Gondwana, and are protected within the Gondwana Rainforests of Australia World Heritage Area.

They grow in cool temperate rainforests from the Barrington Tops plateau in New South Wales, north to the Lamington Plateau and Springbrook Plateau, in southern Queensland, between altitudes of 500 m and 1550m. These are the northern limits of this species. They occur in temperate to cool temperatures and even areas with occasional snowfalls. Clearly the limitations of their distribution to these very climate-specific locations supports the theory that they are remnants from a time when cooler conditions were far more widespread.

I find it staggering to think these trees are so old - some sources say approximately 3000 years old. They were alive during the rise and fall of the Roman Empire, the birth of Christianity, the dark ages and the crusades, and the renaissance period. They would have seen Captain Cook's ship (the Endeavour) sail up the east coast of Australia in 1770, and the slow deterioration of the vast forests that once covered this land. Now they are living through the modern age and most likely will see our demise if we don't lift our game. It does my head in! The weather today was cold, windy, and very misty with occasional drizzle - conditions that these trees love, I'm sure. PS: I particularly love the 2nd photo - the trees look like giant forest sentinels. A bit 'Lord of the Rings' really.

Oh my! That is gorgeous! Trees are just lovely... it's really moving to know of its age. Thank you for sharing this. Beautiful.

Go to the Bunya Mountains, QLD if you want to see awesome!

Good for they eyes... and good for the soul. They have an energy about them that's very difficult to describe. Awe-struck is probably what I felt most.

Best thing my eyes have seen for awhile ... thanks.

Yep - way to go I reckon. Take it anywhere; point an shoot.

Haha. It's because of my mighty you-beaut, el cheapo pocket camera. Thanks mate :-)

Your shots are much better than David's on Wiki. :)

Thanks very much, Lauren. These Antarctic Beech are amazing, and that Yule of yours... WOW! I've never seen anything like it. I did a google search and saw a photo of people holding hands around it's base. There must be dozens of them, and it gives the Yule a real sense of scale. Thanks for the link to your amazing photo. I think our trees would be good mates if they lived side-by-side :-)

This is wonderful. I didn't know they existed. Love your philosophical comments. I feel the same way about an ancient Tule Tree in Oaxaca, Mexico. I stand with it for a long time imagining all that it has seen. It lives in a part of Mexico with thousands of years of Zapotec and Mixtec Indian culture and saw it all at it's peak and the subsequent demise with the spanish incursions (to use a mild word) into Mexico. It is surrounded now by modern town, roads, noise and pollution. It was almost lost several years ago, but is now being pampered and loved. I'm glad your trees are in a National Park. I love your second photo best too.
http://www.projectnoah.org/spottings/231...

Those trees are amazing! Thanks for sharing.

Thanks surekha. They're amazing trees that simply leave you standing in awe. I just love it when nature does that :-)

Absolutely, Leuba. Nature has preserved them in small pockets, and I guess all we have to do is leave them alone. Easier said than done with human beings. We have a good national park system in this country, so at least that affords them some protection.

The amazing bit is someone, at some stage, has fought to preserve these beauties. Hope they continue to enthrall for years to come!!

Thanks, Leanne. There's an energy that emanates from these trees. Can't describe it in words, but it's awe-inspiring and quite humbling. I sat with them for about an hour and then snuck off the track and found some more. Down to Lamington NP in a couple of weeks for some bushwalking. Who knows what's down there. My one wish - deliver me from tourists LOL

Amazing! What an incredible spotting Neil & great information too. Nice one :)

First thing that came to my mind too -'Lord of the Rings' material - quite dramatic ! The gnarled appearance goes well with the age of the trees. Neil, you know so well how best to highlight such features ! Thanks for sharing this lovely series and information with us.

Thanks everyone, and Maria, cheers for your congrats on my 100 spottings. I was bored with photography for a while but PN has encouraged me to pick up my camera again and get out there. Quite refreshing really :-)

Wonderful spotting! And congratulations on 100 spottings on Noah so far!

Fun fact! Many of the Antarctic beech trees within the Gondwana Rainforests of Australia World Heritage Area are believed to be 2,000 to 3,000 years old. The exposed root structures, at one time soil-covered, have been exposed over the ages by erosion, and are now covered in moss and lichen.

The record for the world’s oldest living tree is held by a Great Basin bristlecone pine (Pinus longaeva) is the white mountains of California, which has been dated at 5,062 year old.

Wonderful Neil! I just love those. Here are their Patagonian cousins:
http://www.projectnoah.org/spottings/897...