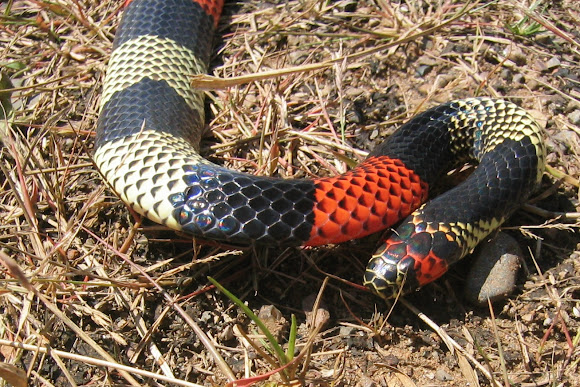 Micrurus obscurus is one of the two largest Coral snakes in the world often reaching lengths over 1.5 meters, Micrurus surinamensis being the other https://www.projectnoah.org/spottings/10... Its colored bands are arranged in triads meaning there are 3 black bands between each pair of red bands (red, black, white, black, white, black, red). Although they are diurnal snakes, they are seldom seen, hiding in the leaf litter on jungle floors. They are Proteroglyphous snakes, meaning they have fixed grooved fangs in the front of the mouth. Like all coral snakes, when threatened they tuck their head in to protect it, twitch violently and wave their tails around like a stinger trying to look dangerous. It works as all the native population are convinced that they sting with their tail and nothing I can do will convince them otherwise. They even call Coral snakes “Scorpion snakes.” They all “know somebody” who was stung 😊

This one was photographed crossing a clearing near the rear of a house in the Amazon rainforest of SE Ecuador (700 masl).

There is disagreement on whether Micrurus spixii and Micrurus obscurus are separate species or variations of the same species. Reptile Database lists them as separate species so I have gone with that. Trying to keep up with reclassification is an impossible job.

Thanks Sukanya. They are spectacular snakes.

Tukup, your snake spottings are spectacular!

Yeah, they are. I've caught Coral snakes by picking them up by the tail for many years. I show them by tapping the end of the tail that there is no stinger there. They won't believe me. Frustrating but funny. They are a lot prettier than the actual scorpions. Thanks Jae.

Nice serie and notes, Tukup. Those scorpion snakes sure are beautiful :)