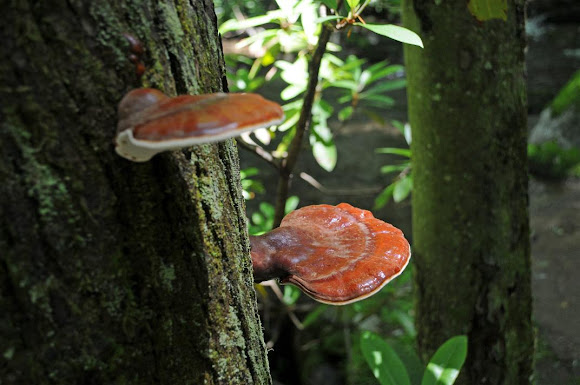 Ecology: Parasitic on living conifers (especially eastern hemlock) and saprobic on the deadwood of conifers; producing a white butt rot of the heartwood--"a soft wet whitish or straw-colored cellulose-destroying decay of the wood" when young, and later a "network of cracks filled with white mycelium" with "numerous black dots throughout the wood" (Overholts, 1953); growing alone or gregariously; annual; widely distributed in eastern North America, and reported from the Southwest. Cap: 5-30 cm; at first irregularly knobby or elongated, but by maturity more or less fan-shaped; with a shiny, varnished surface often roughly arranged into lumpy "zones"; red to reddish brown when mature; when young often with zones of bright yellow and white toward the margin; occasionally with bluish tints. Pore Surface: White, becoming dingy brownish in age; usually bruising brown; with 4-6 tiny (nearly invisible to the naked eye) circular pores per mm; tubes to 2 cm deep. Stem: Sometimes absent, but more commonly present; 3-14 cm long; up to 3 cm thick; twisted; equal or irregular; varnished and colored like the cap; often distinctively angled away from one side of the cap. Flesh: Whitish; fairly soft when young, but soon tough. (information from mushroomexpert.com)

We are going to see this mushroom a lot more as the Eastern Hemlocks die from the Hemlock Wooly Adelgid. They say the DNA is at least 95% similar between Ganoderma lucidem and Ganoderma tsugae so I have always called it Reishi.