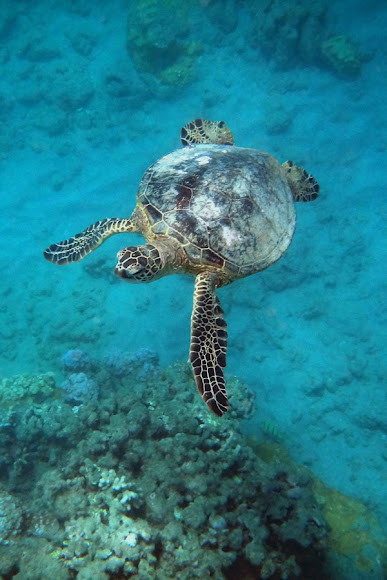 Green Sea Turtle spotted at the Hanauma Bay Nature Preserve on the island of Oahu, Hawaii. This spot is not the best snorkeling spot on Oahu, but it has the greatest biodiversity of any place on the island. We have seen over 100 different species of marine life at this park, over a period of approximately 4.5 years.

Sea Turtles are much more interactive here than anywhere else on the island. Even when you attempt to steer clear of the, they often swim up to you to check you out.

Thanks staccyh, must be the angle of approach that the turtle is making towards me that makes this one so interesting.

When it is time for her to lay eggs, a female green sea turtle will usually return to the same beach where she hatched, laying a clutch of 100 to 200 eggs in a depression dug in the sand with her flippers. She then covers it and returns to the sea, leaving the eggs to hatch after about two months. The most dangerous time of a green turtle’s life is when it makes its first journey from nest to sea, as numerous predators, including huge flocks of seabirds, prey on the vulnerable hatchlings during this short journey. In fact, it is estimated that only one turtle in every hundred survives to reach maturity.

Green turtles are an endangered species, but are still killed for their meat and eggs. Their numbers are also reduced by fatal injuries from boat propellers, drowning in fishing nets, and the destruction of their nesting grounds by human activities. https://upload.facebook.com/projectnoah/...