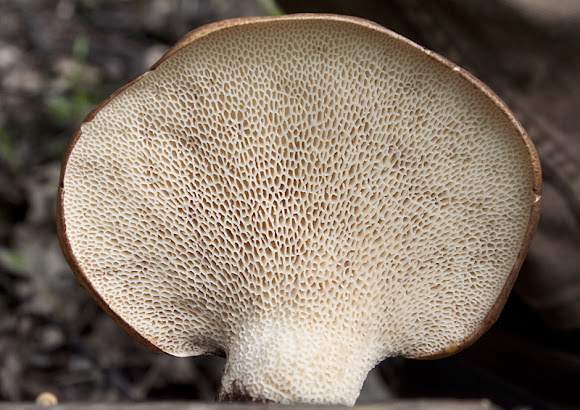 This is a common, easily recognized, wood decaying, bracket fungus. It fruits mostly in the spring but occasionally also in the summer or fall. It is found usually in overlapping clusters of 2 or 3, sometimes singly. It is both saprobic, occurring on logs and stumps of dead hardwood trees, and parasitic, occurring on the lower trunk of living hardwood trees, especially elms. The fruiting body is a large, stalked bracket. The bracket is circular to fan-shaped or kidney-shaped, 2¼″ to 12″ in diameter, and up to 1½″ thick. The upper surface is light yellowish-brown with flat, brown or dark brown scales. The scales have a feathery appearance, which accounts for the common names Hawk’s Wing and Pheasant’s Back. The underside is whitish. The pores are small at first, becoming very large, up to ⅜″ in the largest dimension. The stalk (stipe) is short, thick, tough, and often off-center. It is 1¼″ to 4″ long and ¾″ to 2¼″ in diameter. As it ages the base of the stipe becomes velvety black. The flesh is white. The spores are whitish to cream-colored.