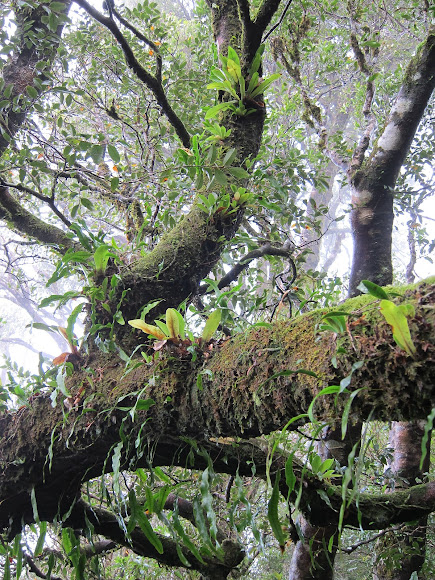 If I am not mistaken (but perhaps this needs to be clarified), these are small suckers of the Bird's Nest Fern (aka Crow's Nest Fern), which is an Australian native. The larger ones are growing as a rosette, but the smaller ones aren't, although the leaves/fronds look exactly the same as the more established plants. Is this how they start? Regardless, they are an epiphyte - a plant that grows upon another plant (such as a tree) non-parasitically or sometimes upon some other object (such as a building or a telegraph wire). It derives its moisture and nutrients from the air and rain, and sometimes from debris accumulating around it. A second ID option would be the Long Felt Fern (Pyrrosia longifolia), but I'm more inclined to think this spotting is the Bird's Nest Fern species.

Grows on rocks or as an epiphyte on trees and is native to eastern New South Wales and Queensland. The clumps can reach a large size, with the centre of the fern acting as a reservoir for debris. They are usually found in the temperate zone or in the tropics. These particular specimens were found in cool temperate rainforest conditions.

These ferns (pictured) were spotted in Springbrook National Park, and thus are protected within the Gondwana Rainforests of Australia World Heritage Area. The weather today was cold, windy, and very misty with occasional drizzle - conditions that these ferns love, I'm sure. They were found on the walking track near the Antarctic Beech trees http://www.projectnoah.org/spottings/266...

I only mentioned it because of your choice of missions...

Springbrook is on the Border Rangers between QLD and NSW. This rainforest is about as far from urban as you can get. I had one Bird's Nest Fern in my garden, but it was an older plant so I never saw it as a sucker, and any fresh leaves that grew formed part of the existing rosette. It's only that the sucker leaves look the same as those on the larger plants, and in such close proximity.

I love these. I have some Asplenium nidus in my large yard. Just an observation...this doesn't look very urban...