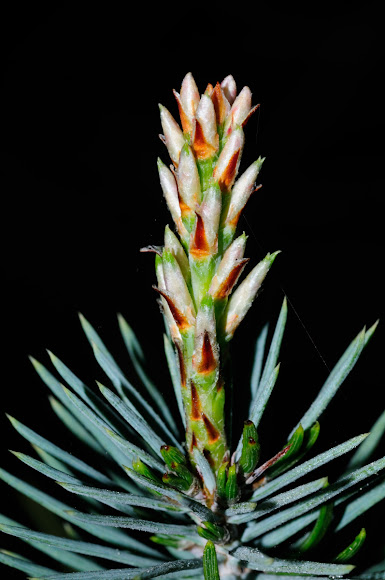 Young specimen. The stone pine is a coniferous evergreen tree that can exceed 25 metres in height. In youth, it is a bushy globe, in mid-age an umbrella canopy on a thick trunk, and, in maturity, a broad and flat crown over 8 metres in width. The bark is thick, red-brown and deeply fissured into broad vertical plates. The flexible mid-green leaves are needle-like, in bundles of two, and are 10–20 centimetres long. Young trees up to 5–10 years old bear juvenile leaves, which are very different, single (not paired), 2–4 centimetres long, glaucous blue-green. The cones are broad, ovoid, 8–15 centimetres long, and take 36 months to mature, longer than any other pine. The seeds (pine nuts, piñones, pinhões, pinoli, or pignons) are large, 2 centimetres long, and pale brown with a powdery black coating that rubs off easily, and have a rudimentary 4–8 millimetres wing that falls off very easily. The wing is ineffective for wind dispersal, and the seeds are animal-dispersed, originally mainly by the azure-winged magpie, but in recent history, very largely by humans.

Stone pines have been used and cultivated for their edible pine nuts since prehistoric times. They are widespread in horticultural cultivation as ornamental trees, planted in gardens and parks around the world. Spotted at a pine-tree and Holm oak forest. Sandy soil.

Pinus pinea has been cultivated extensively for at least 6,000 years for its edible pine nuts, which have been trade items since early historic times. The tree has been cultivated throughout the Mediterranean region for so long that it has naturalized, and is often considered native beyond its natural range. Camera Model: NIKON D300. Exposure Time: 1/60sec.; f/32; ISO Speed Rating: 200. Exposure Bias: 0 EV. Focal Length: 90.0 mm. Flash fired