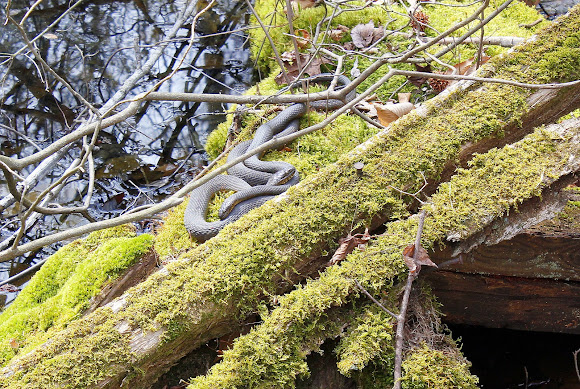 The northern water snake can grow up to 135 cm (4.4 ft) in total length. They can be brown, gray, reddish, or brownish-black. They have dark crossbands on their necks and dark stripes and blotches on the rest of their bodies, often leading to misidentification as cottonmouths or copperheads by novices. They darken as they age. Some will become almost completely black. The belly of this snake also varies in color. It can be white, yellow, or gray. Usually it also has reddish or black crescents. (wiki)

They live near lakes, ponds, marshes, rivers, and canals; just about anywhere there is freshwater. (wiki)

Took a walk today at Great Swamp National Wildlife Refuge (http://en.wikipedia.org/wiki/Great_Swamp...) and spotted 11 of these beauties (including two mating pairs) basking within about an hour time-span. Most were too far from the elevated path to photograph well but this pair made for a nice picture.