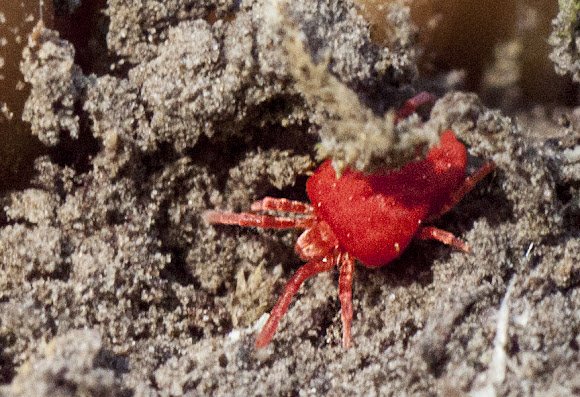 I found several velvet mites around a Mica cap mushroom colony in my yard (a separate spotting, but of which serve as a good size reference in the 2nd and 4th photos here). These specimens are less than 1/8" long including legs.

Red velvet mites are extremely important to the environment. These mites are part of a community of soil arthropods that is critical in terms of rates of decomposition in woodlands and in maintaining the structure of the entire ecosystem. By feeding on insects that eat fungi and bacteria, they stimulate the decomposition process.

Red velvet mites have eight legs and chelicerae like spiders. They are members of the subphylum Chelicerata, a group of critters that have tiny lobster-like claws that serve as mouthparts, a feature that relates them closely to spiders, scorpions, and harvestmen.